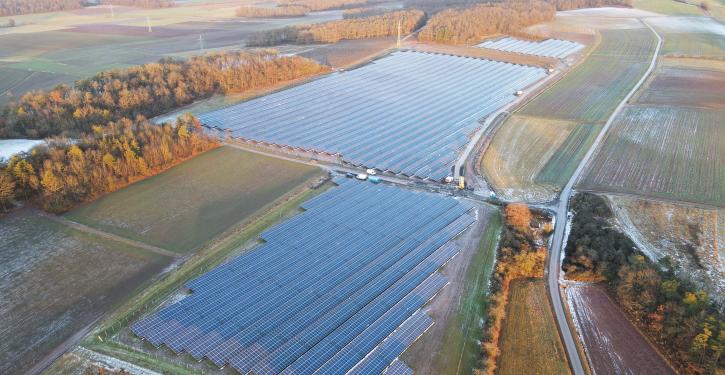 The maximum value in the tenders for PV ground-mounted systems was adjusted to the increased production costs. (Image: Maxsolar)
Bonn (energate) - The Federal Network Agency (Bundesnetzagentur) has raised the bid limit for the tenders for ground-mounted PV systems from the current 5.9 cents to 7.37 cents/kWh. This means that the authority has fully utilised its new leeway to increase the maximum values in the EEG (Renewable Energy Act) tenders by 25 per cent instead of the previous 10 per cent, as it has already done for wind turbines and rooftop installations. This means that companies will already be able to receive more money for the construction of ground-mounted systems in the upcoming March tender.

With the increase, the authority is reacting to the increased interest and construction costs of solar plants, which an expert report by the Stuttgart-based ZSW confirms. In the report, the researchers calculated average production costs of 8.9 to 9.3 cents/kWh, which result from higher investment costs of 800 to 850 euros/kW (previously 650 euros) and 5.2 per cent interest costs (previously 4.1%). In phases of high electricity prices, however, companies could generate additional revenues that "can establish an overall economic viability of the plants", the Federal Network Agency argues in its determination. "The bidders should be able to make adequate bids with the new value," commented Klaus Müller, president of the Federal Network Agency.
The authority had received the new room for manoeuvre from the German parliament on 15 December. It now has the possibility to increase the price for solar plants by up to 25 per cent.


Undersubscription is to end


Most recently, the maximum values, which were set too low, led to a significant decline in bids. In the round ending on 1 June 2022, the regulatory authority was only able to award 696 MW of a total of 1,126 MW of tendered capacity - the first time in the history of solar tenders (energate reported). In the most recent round of tenders for the bid deadline of 1 November, the tendered quantity of 890.1 MW was also missed by a wide margin. The contract was awarded to 117 bids with a total volume of 677 MW.


The Federal Association of the Solar Industry (BSW - Bundesverband Solarwirtschaft) stated that it was therefore urgently necessary to set the new maximum value. A recent industry survey had shown that due to the cost increases for capital and components, solar parks of around 1,000 MW had not recently participated in the tenders. "Self-supply and direct supply with regionally generated solar power, as an indispensable driver of the energy transition, should be made as barrier-free as possible in the future," said BSW's CEO Carsten Körnig. The BSW now recommends that the federal government "promptly remove further market barriers and further improve the investment conditions for solar technology in Germany". /am/mt