Hydrogen pipeline H2Med to be extended to Germany 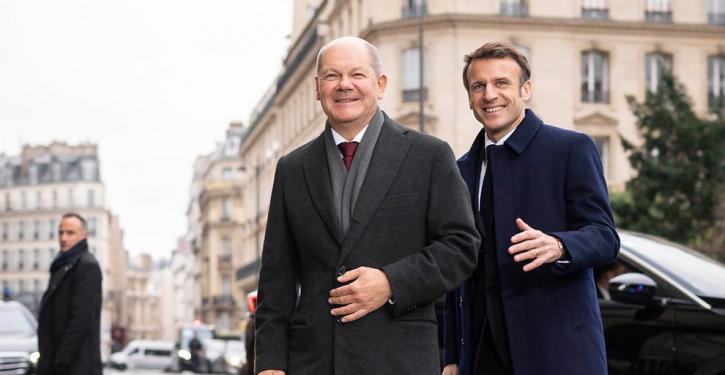 To mark the anniversary of the French-German friendship, the governments met in Paris for a joint government council: German Chancellor Olaf Scholz (left) and French President Emmanuel Macron (right). (Image: Bundesregierung/Kugler)
Paris (energate) - Germany and France want to extend the planned hydrogen pipeline H2Med between Barcelona and Marseille to Germany. This has emerged from a Franco-German declaration of 22 January published by the governments of both countries on the occasion of the 60th anniversary of the Élysée Treaty. In the declaration, both sides commit to taking the necessary measures with a view to a "European Hydrogen Backbone" for the transport of hydrogen throughout Europe.

The H2Med, also called BarMar, goes back to plans for a gas pipeline connection between the Iberian Peninsula and France, which hung in limbo for a long time as the Midcat pipeline. In October 2022, the heads of government of Spain, France and Portugal finally buried the project in favour of a 'green corridor' for hydrogen transports. The hydrogen corridor is to be used only temporarily for natural gas transport (energate reported).


Spain seeks to become a hub for green hydrogen


As Arturo Gonzalo, CEO of the Spanish transmission system operator Enagas, emphasised at a 'Hydrogen Day' of the company in Madrid that H2Med – which costs around 2.5 billion euros – is the basis for Spain to develop into an important hub for renewable hydrogen in Europe. As a potential large-scale producer, the country has enormous capacities for export. According to studies by the grid operator, the Spanish production potential in 2030 is between 2 and 3 million tonnes. In contrast, Enagas estimates domestic demand for 2030 at only 1.3 million tonnes. Up to almost 2 million tonnes could thus be exported to Marseille via Barcelona, Gonzalo calculates.

Enagas has already positioned itself as the operator of the Spanish hydrogen network. With its 50 years of experience as a gas grid operator, fast and cost-effective construction is possible, Gonzalo said in Madrid. The central H2 routes are 80 per cent in line with the existing gas pipelines. Enagas has therefore already identified some of the pipelines that can be converted to hydrogen. Before the end of this year, the network operator will carry out a non-binding expression of interest procedure for the central axes of the Spanish hydrogen backbone, Gonzalo announced.


Meanwhile, in their joint declaration, Germany and France not only advocate green hydrogen. Low-carbon hydrogen should also be taken into account in the European decarbonisation goals, they say. While Germany's National Hydrogen Strategy focuses more on hydrogen from renewable energies, France also wants to use electricity from its nuclear power plants for the production of hydrogen. The two governments announced the establishment of a high-level working group to present recommendations for a joint strategic roadmap by the end of April "to enable large-scale hydrogen production and build a resilient European hydrogen market." /tc