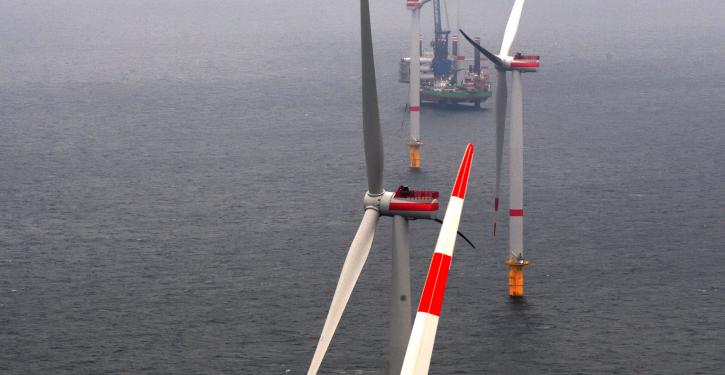 The offshore wind farm 'Kaskasi' went into operation in 2022. (Image: RWE/Matthias Ibeler/Wolfhard Scheer)
Berlin/Hamburg (energate) - The German government wants to reach 30,000 MW of installed offshore wind power capacity by 2030. By 2045, this figure is to rise amounting to 70,000 MW. This leap from the current 8,100 MW is legally binding in the amended Wind-on-Sea Act (WindSeeG). The Federal Maritime and Hydrographic Agency (BSH) has now published an area development plan in the German North Sea and Baltic Sea for the area required for this, according to the Federal Ministry of Economics.


In its plan, the BSH has "condensed the capacity on the existing areas and identified further potential areas", it added. A total capacity of 36,500 MW could be installed on these areas. The plan also specifies which areas will be put out to tender according to the respective procedures with and without preliminary investigation of the areas. A test field to promote research and development in the coastal sea is also specified. The BSH considers the production of green hydrogen on the high seas to play an important role. In the North Sea, the area development plan has defined an enlarged area that can be connected with a hydrogen pipeline. Here, an electrolysis capacity of up to 1,000 MW is possible.


In addition to the specific areas, the plan specifies the tender years, the commissioning and the grid connection. The BSH has also created the basis for cable routes to connect the offshore platforms and the connection capacities to be provided for a European offshore electricity grid, the report continues. The plan also takes into account the results of international working groups such as the North Seas Energy Cooperation.

"We are creating reliable framework conditions for ramping up all the necessary capacities within a very short time. Now it's time for implementation," heralded economics minister Robert Habeck (Greens). The politically desired acceleration of expansion is also urgently needed: Last year, only one offshore wind farm, 'Kaskasi' (342 MW), went into operation (energate reported). Onshore wind energy, on the other hand, is expected to show an upward trend as early as 2022, the ministry added. Last year, net wind turbines with a total installed capacity of 2,030 MW were installed. In 2021, the figure was 1,631 MW.

According to a study by the Fraunhofer Institute for Wind Energy Systems (Iwes), the 70,000 MW of new capacity planned by 2045 is not a final limit. Iwes even attested offshore wind power in the German North and Baltic Seas a potential of almost 82,000 MW. The electricity yield would thus amount to over 290 billion kWh per year at 3,580 full load hours (energate reported). /at