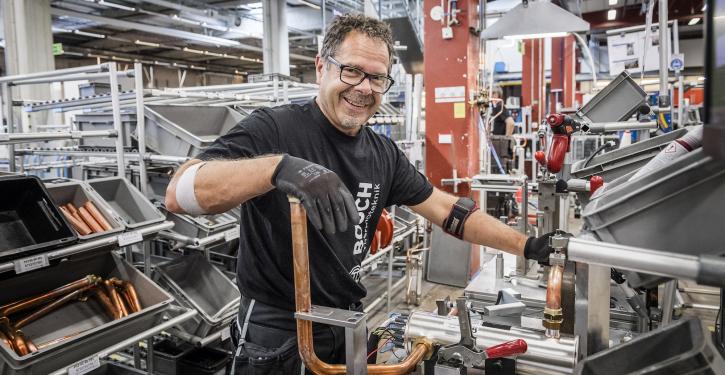 The electrical industry could also achieve new record profits in 2022. (Image: Bosch)
Frankfurt am Main (energate) - The year 2022 brought record profits to the electrical industry. The big drivers were increasing electrification, for example through e-cars, heat pumps, and digitalisation. According to the German electrical and digital manufacturers' association ZVEI (Verband der Elektro- und Digitalindustrie), revenues rose by twelve per cent to 224 billion euros. The member companies also produced 3.7 per cent more than in 2021. At a press conference of the association, ZVEI's president, Gunther Kegel, spoke of a strong year, despite the Ukraine war, the energy crisis, inflation, and continuing tense supply chains.


According to the ZVEI, the highest growth of plus 21 per cent was recorded last year by manufacturers of electronic components. They were followed by information and communication technology, batteries and energy technology, all of which grew by 14 per cent. Automation accounted for a plus of 12 per cent. Things were already going well for the electrical industry in 2021. At that time, revenues increased by almost ten per cent, and for the first time the 200 billion euro mark was scratched. The association has made a fact sheet with further figures available online as a PDF. For 2023, the association expects the upward trend to stop. Although Kegel does not expect a decline, he does expect a consolidation. "As of today, we are assuming a black zero in real production," said the association president.


President Kegel is concerned about the current protectionist economic policies of China and the USA. He urged the EU to take countermeasures, and said it should conclude more bilateral trade and raw materials agreements. The industry's exports totalled 246 billion euros in 2022, an increase of nine per cent and also a new record.

The energy system also worries the association and its members. The chairman of the board, Wolfgang Weber, calls on politicians to shift the focus from affordability back to the energy transition. One particular area where action is needed, he said, is the expansion and digitalisation of the grid infrastructure, the reason for this being the increasing demand for electricity, for example through electromobility. "Our electricity grid is currently not designed for this. It is not ready for the energy transition," Weber said. He added that an adapted electricity market design, which among other things allows for dynamic electricity tariffs, is the second central challenge. He explained that consumers should benefit directly from attractive prices for electricity from renewable energies, this being the only way to achieve the climate goals that have been set. /dz