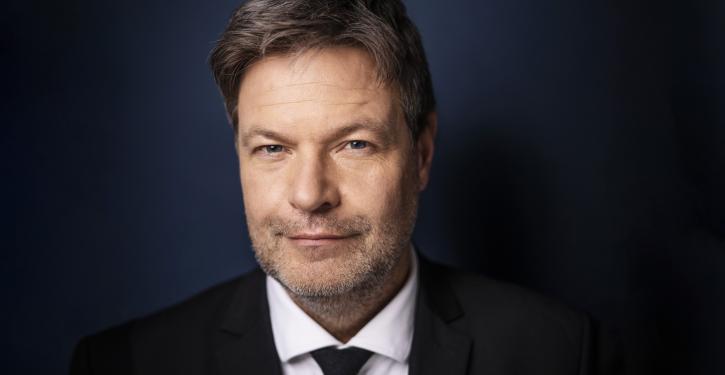 Germany's economics minister Robert Habeck currently no longer expects a gas shortage. (Image: BMWK / Dominik Butzmann)
Berlin (energate) - At the Handelsblatt Energy Summit in Berlin, Germany's economics minister Robert Habeck (Greens) announced that he wants to enable cross-border trading of CO2 for storage in Europe. Where the CO2 would then be injected is an economic question, Habeck said. For a northern German company, for example, Denmark would be closer than southern Germany. The German government has already decided in principle to allow the capture and transport (CCS) of CO2 from industrial processes (energate reported). However, there are still legal hurdles to transporting the carbon dioxide to storage sites outside Germany. "Words must now be followed by action. Germany should ratify the amended Article 6 of the London Protocol as soon as possible to enable the transport of CO2 to neighbouring countries," demanded Klaus Langemann, SVP Carbon Management and Hydrogen at Wintershall Dea at the meeting. The oil and gas company wants to establish CCS as a new mainstay and already has corresponding projects in the pipeline.

"We need CCS. We cannot decarbonise certain industrial processes in any other way," Minister Habeck stated at the energy summit. During his visit to Norway, the Minister of Economic Affairs also had the controversial technology demonstrated to him (energate reported). He is also counting on Norwegian blue hydrogen. In this country, CCS is not ruled out in principle. "I don't see blue hydrogen on a large scale in Germany," he said at the energy summit. At the weekend, the CDU also spoke out in favour of CCS technology at the executive board meeting in Weimar (energate reported). In 2012, as environment and energy minister in Schleswig-Holstein, Habeck had still advocated a ban on storing CO2 underground.


"Crazy turnarounds" in the energy crisis


Ten years later, as Federal Minister of Economics, Habeck was suddenly faced with completely different challenges, as he made clear at the conference. He had experienced "crazy turnarounds" in the energy crisis after the start of the Russian war of aggression in Ukraine. "All the worries about a meltdown of German industry were real and Putin's plan," Habeck said. "We were looking into the abyss." Because of the numerous measures, nothing happened, he said. Still, he said, the crisis was not over. "Unforeseen things can happen, we have seen that," Habeck said, for example, referring to the attack on the Nord Stream pipelines.

But he believes the situation is now manageable and is optimistic about natural gas supplies and prices in the coming winter, which is why he says it is now important to open the horizon again: "We must not fail in the structural climate crisis," he said. The return of coal, for example, was necessary, but "a sin in terms of climate policy" that should not be prolonged unnecessarily. In addition to the expansion of renewable energies, the construction of hydrogen-capable gas-fired power plants, for which the LNG infrastructure is now being laid, should also help. "They have to put as much as they can into the market," said Habeck, adding that although it requires a large capacity, it does not have to run permanently if there is enough renewable electricity. Habeck announced the tender design for the power plants for this year.


Habeck also commented on the reform of the electricity market design. Spain has made an interesting proposal, with a capacity market for fossil power plants on the one hand and Contracts for Difference (CfD) for renewables on the other. An industrial electricity price must also be introduced at the European level, said Habeck. The Ministry of Economics is currently examining the introduction of an industrial electricity price in Germany (energate reported). But a European solution is better from the minister's point of view. /ck