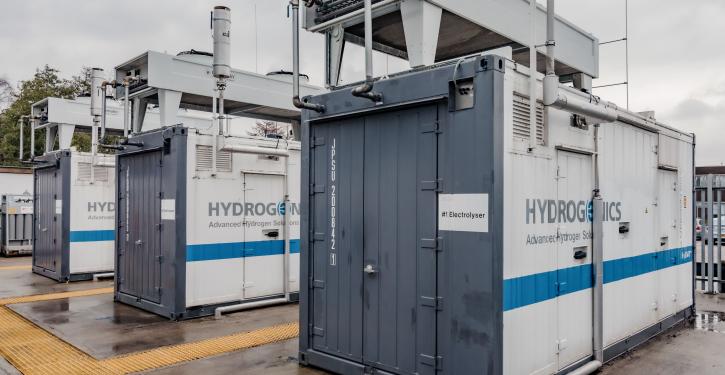 Companies are demanding a starter programme for hydrogen from the federal government. (Image: Zukunft Gas/Ilja C. Hendel)
Berlin (energate) - An alliance of energy suppliers and gas grid operators is demanding special tenders from the federal government in order to be able to put hydrogen projects with a capacity of 1,000 MW into operation by 2025. This emerges from a letter to the Federal Ministry of Economics and members of the Bundestag, which energate has received in advance. The signatories include the energy suppliers Trianel, Thüga and Uniper, the gas trader VNG, the gas grid operators Ontras, Open Grid Europe and Terranets. BP Europe and Siemens Energy are also involved. Some of the companies have joined forces in the gas coalition (energate reported).

In the letter, the alliance identifies a gap in the promotion of hydrogen ramp-up. The IPCEI programme, which is linked to Europe and is intended primarily for large-scale projects, requires a long and complex application process. The climate protection contracts (Carbon Contracts for Difference) planned by the German government are primarily intended for industrial companies and are also lengthy. "In order for 10 GW of hydrogen generation capacity to actually be realised in Germany by 2030, we are convinced that at least 1,000 MW of hydrogen generation capacity must actually be put into operation during this legislative period," the letter continued.


At present, no company is willing to invest because of unclear framework conditions in Germany and Europe. There is an urgent need for political action here. In the Alliance's view, a starter programme for 1,000 MW of hydrogen capacity should help. In addition to the funding programmes planned so far until 2030.

According to the authors, this should be based on the double auctions of the state foundation H2-Global. The foundation buys green hydrogen worldwide via tenders and offers it to companies in Germany (energate reported). This is handled by Hintco (Hydrogen Intermediary Company). The foundation offsets the higher costs for green hydrogen. A budget of billions is available for this.


The companies want to use this instrument for the starter programme. To this end, they propose two tender dates, on 1 August 2023 for a quantity of 300 MW and on 1 February 2024 for 700 MW. They reject a limitation of demand to certain sectors. The tenders are to be open to all user groups, they stated. The Federal Ministry of Economics wants to limit the use of hydrogen initially to industry and transport. The heating sector is supposed to be left out (energate reported).

As a further cornerstone for the starter programme, the companies are demanding that the federal government assume the risk with regard to the still unclear EU specifications for green hydrogen. The EU renewable energy directive currently under discussion and the associated Delegated Act are decisive for this. The proposal is that if there is a clear EU definition for green hydrogen by 1 June 2023, this should also apply to the starter tenders. If this is not the case, the Alliance believes that the Federal Republic of Germany would be asked to assume 90 per cent of the risk of additional costs in the event of subsequent compliance with the EU definition.


Counterweight to US plans


The authors also see the starter programme as a counterweight to the US government's Inflation Reduction Act, with which it massively subsidises green technologies. "The starter programme enables German companies from the hydrogen value chain to actually invest in projects in Germany." /kw