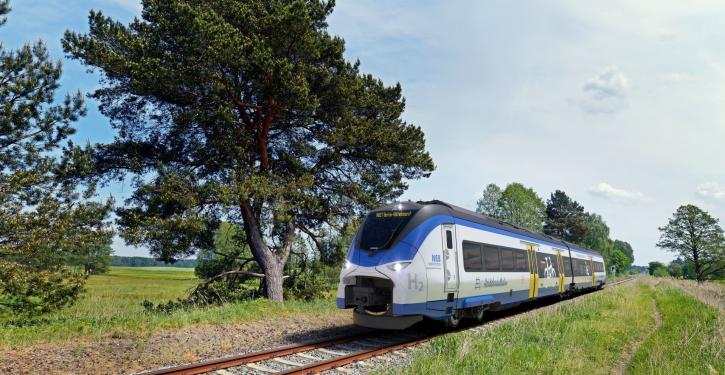 Fuel cell trains are to run on a NEB railway line in the future. (Image: Niederbarnimer Eisenbahn AG)
Potsdam (energate) - The financing of the Brandenburg hydrogen project 'H2BAR' is in place. Jörg Steinbach (SPD), Brandenburg's minister of economic affairs, has now handed over the last two outstanding grant notifications amounting to around four million euros, his ministry announced. The project can now be realised in full. The total investment for 'H2BAR' thus amounts to about 110 million euros. Among others, the Federal Ministry of Transport has already contributed 25 million euros.

The project is the first regional cluster for green hydrogen mobility in the Barnim district of Brandenburg. The goal is to convert a line of the Niederbarnimer Eisenbahn (NEB) to hydrogen-powered fuel cell trains. In addition, the energy holding company of Barnim (Barnimer Energiebeteiligungsgesellschaft - BEBG) wants to run buses and waste collection vehicles on hydrogen in the future. The hydrogen needed for this is to be produced regionally with renewable energies and provided via a new filling station infrastructure.

A number of companies and research institutions are on board. In addition to the NEB, these include the project developer Enertrag, the Barnim district utility and the German aerospace centre. /dz