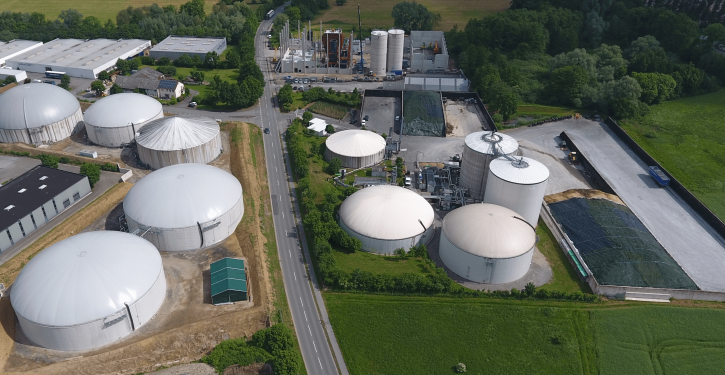 The demand for biomethane is increasing in Europe. (Image: BayWa R.E.)
Coevorden (energate) - The Swiss oil company Varo Energy is building one of the largest biomethane plants in Europe. To this end, the company is buying 80 per cent of the Dutch Bio Energy Coevorden in a first step and will more than double the current capacity from 300 to 650 million kWh within four years in a second step. After the expansion, the site will be one of the three largest biomethane plants in Europe. The ideal location on the border between the Netherlands and Germany, close to major industrial centres and large-scale agriculture, offers both a growing supply of feedstock and increasing demand, the company stated.

The sellers are current shareholders Stak Grisbe, which will continue to hold 15 per cent of the company, and the Van Drie Group, which will hold the remaining five per cent. Varo did not disclose the purchase price, but said it was the largest acquisition since 2015. That year, Varo invested 50 million Swiss francs in the Cressier refinery. The year before that, the Zug-based company entered the Bayernoil refinery company in Germany, where it holds a majority stake of 51.43 per cent. In the renewables division, which Varo wants to expand step by step, the acquisition will contribute about 20 to 25 per cent to the operating result (Ebitda).


In Coevorden, the Netherlands, just 20 metres from the German border, the plant processes 215,000 tonnes of biomass per year from livestock, agriculture and residues from the food industry. Bio Energy Coevorden feeds 26 million cubic metres of biomethane into the Dutch gas grid, more than all the households in the municipality consume. Varo has set itself the goal of producing one terawatt hour of biomethane or bio-LNG by 2026. After the expansion, the Dutch site will already contributing 65 per cent to this with 650 million kWh. /mt