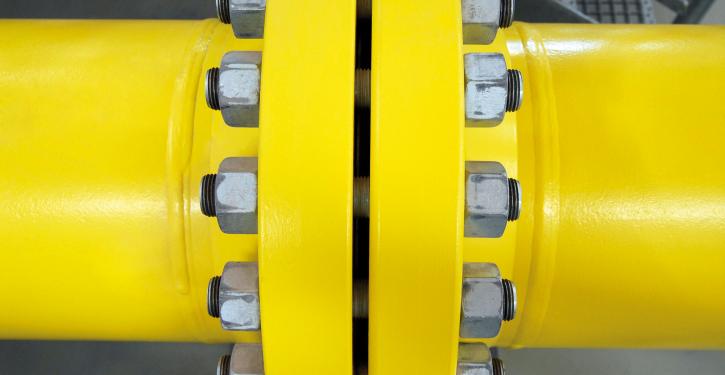 Thyssengas takes over a natural gas pipeline from RWE to bring hydrogen from the Netherlands to Germany. (Image: Thyssengas)
Dortmund (energate) - The transmission grid operator Thyssengas has acquired an approximately twelve-kilometre-long natural gas pipeline from RWE Generation. It is located on the Dutch border and is supposed to be used for cross-border hydrogen transport, Thyssengas announced. The background to this is the plans to build a hydrogen infrastructure as part of the 'Get H2' initiative. The conversion measures are to start as early as mid-2023.

"For Thyssengas, the pipeline purchase is a central piece of the puzzle in the implementation of our hydrogen strategy," commented Thomas Gößmann, CEO of Thyssengas GmbH. The pipeline runs from Vlieghuis in the Dutch province of Drenthe to Kalle (Grafschaft Bentheim). Via the existing pipeline grid of the long-distance gas grid operators OGE and Nowega and a new hydrogen pipeline to be built from Dorsten to Duisburg-Hamborn, the hydrogen will be transported from there to the Ruhr area. The Dorsten-Duisburg pipeline is being built by OGE and Thyssengas. Its completion is planned for 2026. Originally, Thyssengas had also planned a new construction for the Vlieghuis-Kalle line and registered it in the NEP Gas 2030. This measure is no longer necessary with the takeover of the existing pipeline from RWE.


"With the acquisition, we as transmission system operators are once again making advance payments," Gößmann continued. Now it is up to the politicians to create investment security for hydrogen infrastructure and the market ramp-up as quickly as possible. At the European level, the industry is still waiting for a decision on the IPCEI projects, including 'Get H2'. At the federal level, recommendations to the Federal Network Agency and the legislator have been available since the beginning of September in the form of the hydrogen report of the transmission grid operators, said the Thyssengas managing director. There is growing displeasure among grid operators that politicians are setting ambitious hydrogen targets but are putting the brakes on the ramp-up (energate reported).


According to Thyssengas, Get H2 is backed by around 50 companies, institutions and municipalities that are committed to creating a hydrogen market. This is to be realised in several steps between 2024 and 2027. The first part of the overall project is the 'Get H2 Nucleus', a publicly accessible network for green hydrogen, which is to be built between Lingen (Lower Saxony) and Gelsenkirchen (North Rhine-Westphalia). The connection to the Netherlands via Vlieghuis would then be part of the second expansion stage. According to information in the NEP Gas, there is a potential of up to 5.9 GWh/h of hydrogen imports from the Netherlands via the border crossing points Oude Statenzijl, Vlieghuis and Zevenaar for the German market in 2032. /tc