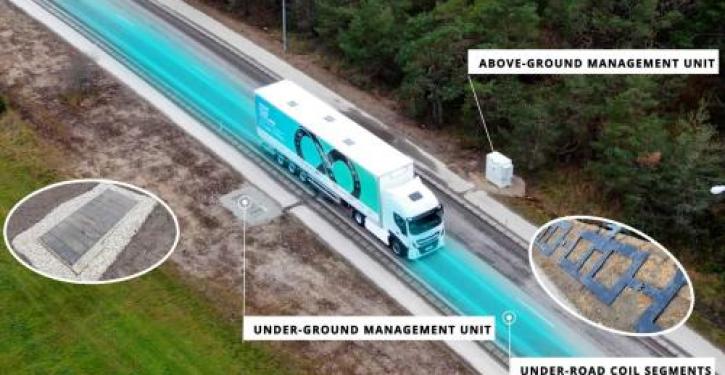 Electreon's electric road system is also used on test routes in Germany. (Image: Electreon)
Nuremberg (energate) - A public test track for inductive charging is being built on a one-kilometre stretch of motorway in northern Bavaria. Electric cars and commercial vehicles will be able to charge their batteries there by induction from mid-2025, the Friedrich-Alexander University Erlangen-Nuremberg (FAU) announced. Coils in the road surface generate a magnetic field when vehicles equipped with a corresponding counter-coil drive over it and park, thus generating charging current for the battery. With this project, FAU is testing automated manufacturing and installation processes for the wireless Electric Road System (ERS) developed by the Israeli company Electreon. Electreon is already involved in Germany's first public road project for wireless charging by EnBW in Balingen, Baden-Württemberg (energate reported).


Standardisation paves the way for future series production of such roads, explained project manager Alexander Kühl from the FAU chair of manufacturing automation and production systems (FAPS). In the future, the technology could make an important contribution to minimising the range problem due to the lack of available charging stations. Compared to roads electrified with overhead lines, the invisible integration into traffic areas also offers the advantage that it is suitable for all types of vehicles.


Intermediate charging with up to 70 kW


According to Kühl, the short test track planned in northern Bavaria is not sufficient to fully charge the passing vehicles, but "in comparable tests, up to 70 kW of power have been transmitted so far". In addition to the FAU and Electreon, the TH Nuremberg, the Berlin-based digital project planning company Via Imc, the Baden-Württemberg plant manufacturer Risomat and Autobahn GmbH are also involved in the eight-million-euro project called Empower. It is receiving funding from the Federal Ministry of Economics and Climate Protection as part of the 'Elektro-Mobil' programme. /ne