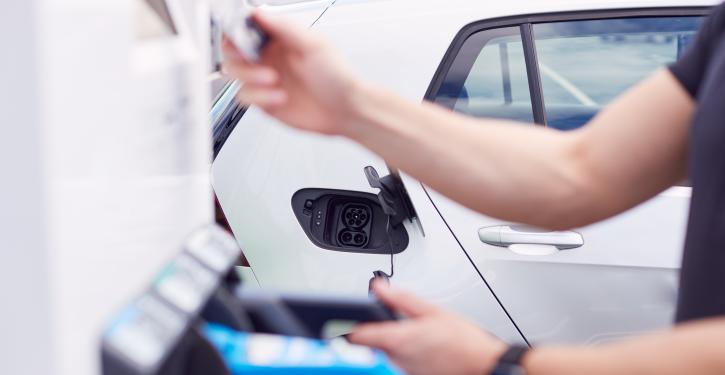 Charging points installed from July onwards must also have a card terminal. (Image: Envato Elements/monkeybusiness)
Essen (energate) - The new year brings innovations for electromobility. The most important changes at a glance: Charging points that go into operation from July 2023 must have a card terminal for ad-hoc charging. The terminal must offer a contactless payment process via credit and debit card (Mastercard, Visa and Girocard). This is provided for in the amended charging station ordinance (LSV), which already came into force on 1 January 2022. Up to now, only a "common card-based" or a "common web-based" payment system must be offered. Existing charging stations do not have to be retrofitted.Nevertheless, the requirement is controversial among operators of charging infrastructure because of the additional expense.

The federal government wants to make payment more user-friendly. Everyone should be able to charge and pay for charging electricity at public charging stations at any time without having to enter into new contractual relationships or download a new app. Further changes in the course of the LSV amendment have already come into force in 2022. For example, charging points put into operation since 1 March must have a standardised data interface. The Federal Network Agency has published a fact sheet on the LSV online as a PDF.


Since the beginning of the year, the new section 14a EnWG on controllable consumers such as electric cars, heat pumps or battery storage has also been in force. It is intended to regulate how the increasing number of these new consumers can be integrated into the system. From the grid operators' point of view, this should prevent local power cuts. Charging station operators are hoping for new business models. The automotive industry, on the other hand, warned against too drastic interventions and loss of comfort for e-car drivers.

Although the paragraph has officially been in force since 1 January 2023, the Federal Network Agency is currently still working out the concrete framework conditions. At the end of November 2022, the authority initiated the definition process with a key points paper. The paper grants grid operators access to controllable consumers in order to be able to regulate them down if necessary. In return, the operators are to benefit from reduced grid fees. Market participants have until 27 January to submit their comments on the key points within the framework of a consultation procedure. On 15 January, the Federal Network Agency will offer a virtual information event, for which the registration deadline was already 11 December 2022. The new conditions are to apply definitively from 2024.


New subsidy rates and conditions for the purchase of electric cars are now in force. Since the beginning of the year, there is no government subsidy at all for plug-in hybrids, which critics consider harmful to the climate. For fully electric cars up to a net list price of 40,000 euros for the basic model, the federal contribution has dropped from 6,000 to 4,500 euros. For a net list price above 40,000 euros up to 65,000 euros, it is now 3,000 euros instead of 4,500 euros. In addition, as of 1 September, only private individuals are eligible to apply. At the end of 2022, the Christian Democrats (CDU/CSU) introduced another motion in which they demanded, among other things, a transitional solution for plug-in hybrids (energate reported). The new funding guidelines have been published in the Federal Gazette.


Two further innovations are that in 2023, the potential revenues from greenhouse gas quota trading (GHG quota) will decrease. These depend on the reference value for greenhouse gas emissions from electricity, which is recalculated annually by the Federal Environment Agency. If the value rises, the revenues fall. After a Corona-induced dip, that is exactly what is happening this year. Since 2022, charging station operators and e-car owners have also been able to trade the GHG quota.

At the end of this year, an important transitional regulation will also expire. According to section 7c, paragraph 1 of the EnWG, operators of distribution grids may neither own charging points nor develop, manage or operate them in the future. This is to apply after 31 December 2023. Critics have called for improvements, for example, unlike in the case of electricity or gas, smaller companies are not currently exempt. /dz