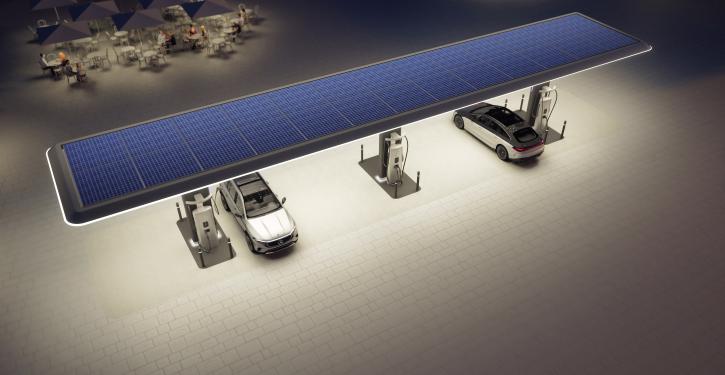 Mercedes-Benz plans to equip some of the new fast-charging stations with solar panels. (Image: Mercedes-Benz Group AG)
Las Vegas/Stuttgart (energate) - The car manufacturer Mercedes-Benz is building its own global fast charging grid. This was announced by Markus Schäfer, chief technology officer of the Stuttgart-based company, at the 'CES 2023' technology trade fair in Las Vegas. On board are the US solar plant and storage operator MN8 Energy and the charging grid operator Chargepoint. The three partners will start building 400 charging parks with over 2,500 high-power chargers (HPCs) in North America this year. By 2027, they will be built in major cities, metropolitan areas and along highways and transportation hubs. Each charging station will generally have four to twelve and in some cases up to 30 charging points with up to 350 kW of power.


Expansion towards Europe and China


In the next step, Mercedes-Benz wants to expand the grid to "Europe, China and other core markets", as CTO Schäfer announced. By 2030, there should be more than 10,000 fast chargers worldwide "that go beyond the existing charging offer", the group stated with regard to its numerous charging cooperations. Mercedes customers, for example, now have access to more than 400,000 charging points in 31 countries through the Digital Charging Solutions joint venture (energate reported), which was founded by BMW and Daimler and expanded to include BP.


Mercedes is relying on intelligent charging management for the planned fast-charging grid. This shortens the standing time by providing the maximum possible capacity for the respective vehicle. While the grid will also be open to other vehicle brands, Mercedes drivers will enjoy priority through a reservation function. Against the backdrop of its corporate strategy "Ambition 2039", which envisages a CO2-neutral new car fleet by 2039, Mercedes-Benz is also focusing on green charging power. For this purpose, the German carmaker is supported by the solar power supplier MN8 Energy in the USA. In addition, Mercedes-Benz intends to use green electricity supply contracts and green electricity certificates. Some charging stations will also be equipped with photovoltaic systems that provide electricity for lighting and video surveillance on site. /ne