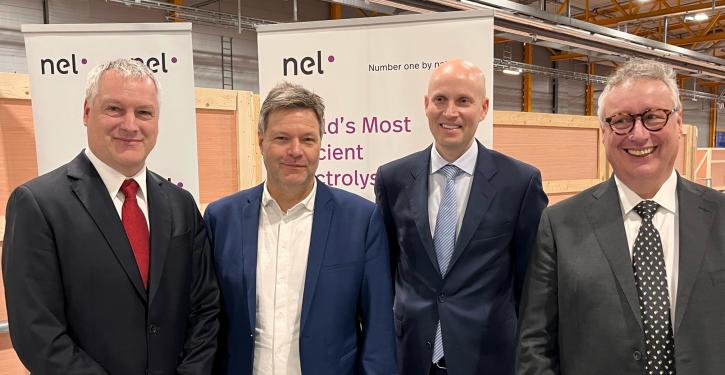 Elektroylse deal: from left to right Andreas Schierenbeck (HH2E AG), economics minister Robert Habeck, Hakon Volldal (Nel), Alexander Voigt (HH2E AG). (Image: HH2E AG)
Berlin/Oslo (energate) - HH2E AG orders electrolysis plants with a capacity of 120 MW from the Norwegian hydrogen specialist Nel. The order has a volume of around 30 million euros, HH2E AG announced. Both companies signed an agreement during the trip to Norway of economics minister Robert Habeck (Greens), which served the closer cooperation of both countries in the field of hydrogen (energate reported). HH2E and Nel intend to sign the final purchase agreement in the current year. According to the companies, it is the largest order for electrolysis capacities in Germany to date.


The still young HH2E AG has raised capital in the billions and plans to build up hydrogen capacities in Germany to the tune of 4,000 MW by 2030 (energate reported). This corresponds to 40 per cent of the production capacity planned by the German government for this period. Alexander Voigt, co-founder of HH2E AG, explained that one prerequisite for achieving the hydrogen production goals the company has set itself is the availability of high-quality electrolysers like those supplied by Nel. The cooperation between the two companies is therefore planned for the long term, he said.

The first major project is planned by HHE AG in Lubmin (energate reported). Starting this year, a plant will be built there in cooperation with the MET Group, which is to reach an output of 1,000 MW in the final expansion stage. Commissioning of the first stage is scheduled for 2025. /kw