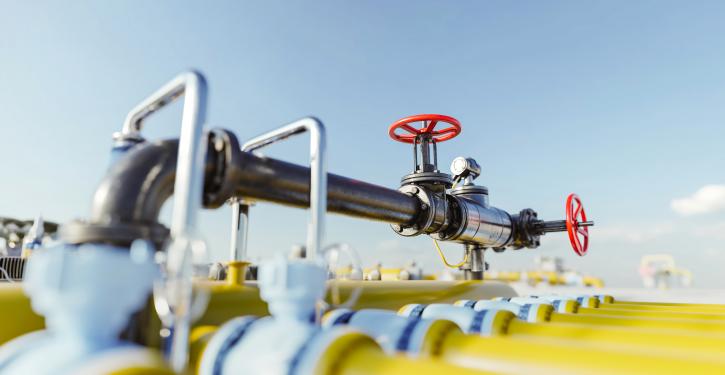 In 2022, Germany imported 1,440 TWh of natural gas. (Image: Envato/photocreo)
Bonn (energate) - As a result of the Ukraine war and the gas crisis, Norway has risen to become the most important natural gas supplier for Germany. Around 33 per cent of the total imported 1,440 TWh of natural gas came from Norway last year. In 2021, Russia was still the largest supplier for Germany, accounting for around 51 per cent of the import volume. In the course of the year, gas deliveries from there declined significantly. Whereas until mid-June around 1.7 TWh of gas arrived daily via the Nord Stream 1 pipeline, deliveries gradually fell by 60 and 80 per cent until they stopped altogether at the beginning of September (energate reported). Looking at 2022 as a whole, the share of Russian natural gas is still 22 per cent. This is shown in the figures recently published by the Federal Network Agency on gas supply in 2022.

Germany has partially compensated for the lack of gas supplies from Russia with additional imports from other countries. In addition to Norway, these were primarily the Netherlands and Belgium, but later also France. At the same time, exports to neighbouring countries decreased, partly due to a temperature-related lower demand for gas. In total, Germany exported around 501 TWh of natural gas in 2022, compared to 749 TWh in 2021. In the overall balance, this meant that at 948 TWh there was even more natural gas available in Germany than in the previous year (902 TWh).


Gas consumption also fell in 2022 compared to the previous year. "Germany saved a lot of gas in 2022," wrote the Federal Network Agency in this regard. The regulatory authority, and in particular its president Klaus Müller, had repeatedly called for gas savings since the summer against the backdrop of an impending gas shortage. The bottom line is that Germany will now have consumed a total of 847 TWh of gas in 2022. That is 17.6 per cent less than in 2021 (1,023 TWh). The mild winter so far has probably been the main factor in saving gas. On average, temperatures in 2022 were 1.1 degrees Celsius above the average of the last four years. October 2022 was even 2.3 degrees Celsius above the monthly average. December, on the other hand, was significantly colder than in previous years, with an average temperature of 1.8 degrees Celsius.


Storage level of over 90 per cent


Gas price back to pre-war level


Meanwhile, gas prices returned to some degree of normality at the turn of the year after a thoroughly turbulent 2022. At the turn of the year, the wholesale price was 63.8 €/MWh. Since March 2022, the wholesale gas price had multiplied. Prices reached their highest level for the time being at the end of August at 315.9 €/MWh on the EEX energy exchange. They were thus about four times as high as before the outbreak of the Russian war in Ukraine. By November, prices had fallen again significantly and reached the lowest level of the year at 22.4 €/MWh on 1 November 2022. In the first week of 2023, the bearish mood that had already set in in trading before the turn of the year continued. This is mainly due to the almost spring-like temperatures in Germany (energate reported) /ml