"Last Exit Montreal? Why only the circular economy can save the planet" 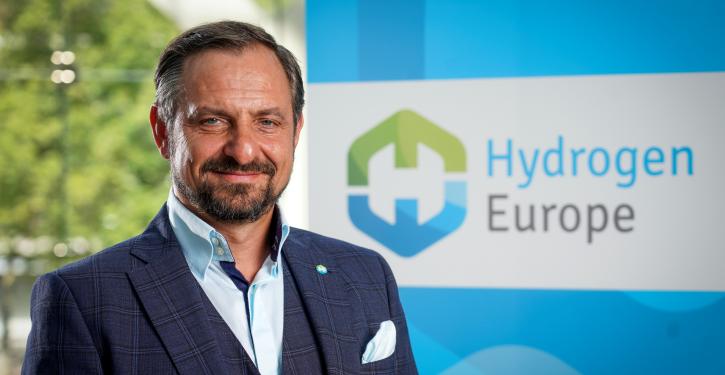 Jorgi Chatzimarkakis, Hydrogen Europe: "Gas electrolysis could reach industrial maturity in 2030". (Image: Hydrogen Europe)
Brussels (energate) - The Earth's resources seem to be depleting just as fast as the rate of species extinction is accelerating. But we still have a chance to turn the tide. Renewable resources in energy, building construction or agriculture are the decisive lever for this. Gas electrolysis could be a key technology.

Yet even a few changes in strategy could achieve great things on a small scale. One example is the principle of 'brownfield' versus 'greenfield'. What is meant by this is that it is better to reallocate existing industrial land than to constantly consume land. The same applies to energy, which is a key resource. Instead of continuing to extract finite resources such as fossil oil and gas and burning them irrevocably, it is better to use renewable energy sources and, for example, produce biogases in Germany without CO2. Imported LNG gas could also be used in this way as a transitional solution and processed without emissions.


Gas electrolysis as a key technology


How could this be realised? With the technique of so-called gas electrolysis as a possible key technology. In gas electrolysis, methane (CH4), either biomethane or from biomass or waste, is split into hydrogen (H2) and solid carbon (C) by means of an anode and a cathode using renewable electricity. Hydrogen produced in this way is called green or decarbonised hydrogen because the carbon is recovered in a solid state and not released into the atmosphere. This is exactly what makes gas electrolysis an emission-free process. The technology is not new. It was first used in principle in Marl in the 1940s.


Today, intensive work is being done worldwide on researching and developing various innovative processes. Experts assume that the new technological approaches will be mature and competitive for the industrial production of climate-neutral hydrogen by 2030. Gas electrolysis is a very efficient process. It requires only one fifth of the energy needed to produce the same amount of hydrogen from drinking water, and does so without the use of drinking water.

If electricity from renewable sources and biomethane are used in whole or in part as feedstock for the reaction, this process can be used as a negative emission technology unlike electrolysis, since the CO2 previously removed from the atmosphere and neutralised in the biomethane is not released again during the reaction and the use of the hydrogen thus produced. This means that no climate-damaging greenhouse gas effects are produced. The carbon produced as a solid product during gas electrolysis can be used as an important industrial raw material in the aluminium, steel or construction industries or as a graphite substitute for battery materials, where it can reduce emissions.


The possible applications in agriculture are particularly interesting and promising. Incorporated into the soil, the carbon serves as a water and nutrient reservoir and thus promotes plant growth and the increased binding of CO2 from the atmosphere (3 kg CO2 per kg C). At the same time, the use of chemical fertilisers can be significantly reduced or avoided altogether. This basic material can also be used to counteract soil erosion, which makes an important contribution to biodiversity and reduces emissions.


Technology enables us to find answers to the questions of sustainability. It is important to advance technologies in an ideology-free manner and within the framework of the social market economy. This is how sustainable, green growth emerges, which is not linear but circular. Montreal is now an opportunity to proclaim the 'cyclocene'.