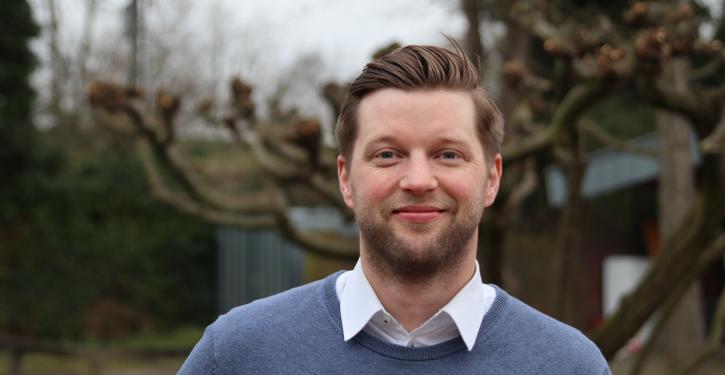 Julian Deymann heads the Lorawan project at Stadtwerke Krefeld. (Image: SWK Stadtwerke Krefeld AG)
Krefeld (energate) - The public utility company Stadtwerke Krefeld AG wants to equip all of its 450 groundwater measuring points with Lorawan sensors. "The rollout has already started with 50 of them. We want to have converted all measuring points by the end of 2024," said the head of the Lorawan project, Julian Deymann, in an interview with energate. Up to now, employees of the public utility company have visited each of the metering points once a month. This work will no longer be necessary in the future. In total, Stadtwerke wants to install more than 1,500 sensors for various applications in the city by the end of 2024, 300 have alredy been installed. Around 20 gateways have also been mounted, and another 5 are planned. Last year, the utility had transferred the Lorawan activities from the pilot to the project phase, and now the large-scale rollout is starting.

In addition to measuring the groundwater level, the municipal utility uses Lorawan for other internal and external applications. The internal applications include equipping the heat meters for the district heating supply with digitally readable modules and, of course, metering. The municipal utilities also use Lorawan for the waste disposal companies, for the level measurement of used clothing and waste paper containers. This enables the waste management companies to optimise their routes, Deymann explained: "Old clothes containers in particular are filled very irregularly. If someone comes to a container with five bags, it is full while all the other containers are still empty."


As another smart city application, the municipal utility has installed sensors to monitor parking spaces on a much-used street. "We also equip our charging columns with parking space monitoring, as the usual apps only show whether a charging column is currently occupied by a charging vehicle. Cars often park at the charging stations without charging," Deymann has observed. The occupancy of disabled parking spaces will also be included in the monitoring in the future.

In addition, the municipal utility collects weather and environmental data for the city via Lorawan, i.e. precipitation and temperature. They are also currently testing the measurement of fine dust. "For the measurement of fine dust, cities have so far borrowed equipment from the State Environmental Agency in order to collect data selectively. We want to check whether we can supplement the surveys with cheaper Lorawan measuring stations," Deymann announced. Other possible applications include frequency measurements and traffic counts. Deymann explained that volume measurements could be combined with light sensors. In this way, the lanterns in a street could shine brighter when the noise level rises.

The municipal utilities also have solutions for building management with the help of Lorawan applications. Heating thermostats can be controlled externally with the help of Lorawan, even if the building is poorly connected to the internet and mobile radio. A link with movement data is also possible here. Rooms that are not in use do not have to be heated unnecessarily.


The municipal utilities also offer Lorawan applications for external customers from industry and commerce. These include metering and sub-metering solutions. "We can use these to detect leaks, for example," said Deymann. At one customer, the Stadtwerke monitors the temperature in the production halls. If the temperature drops below zero, the heating system kicks in to prevent damage to the machines, Deymann added. If electricity is consumed at the weekend even though no work is being done, this is an alarm signal. "Especially in times of high energy prices, companies naturally try to prevent unnecessary consumption," Deymann stated. In previous projects, this has led to enormous monetary savings. For example, one company saved a 5-figure sum by discovering a leak. In addition, the municipal utilities also offer level monitoring, for heating oil, for example, as a service. /sd