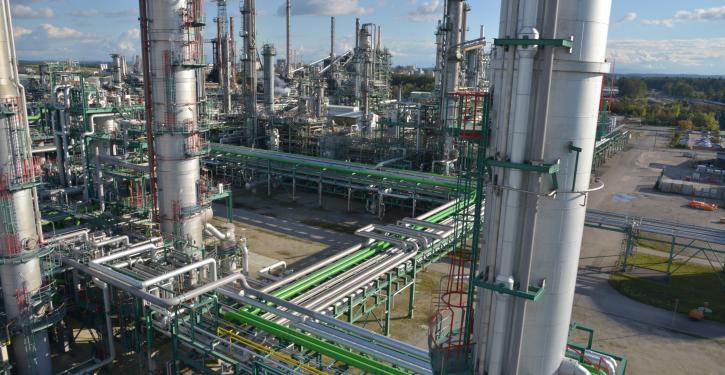 The Bavarian hydrogen network is to start in Ingolstadt and Burghausen - the picture shows the OMV refinery there. (Image: OMV)
Munich (energate) - A state-owned grid company for hydrogen has no discernible added value in the view of the Bavarian long-distance grid operator Bayernets. On the contrary, such a step would massively slow down the development of the urgently needed infrastructure, warns Stefanie Jacobi, Project Development Hydrogen and Deputy Head of Network Strategy & Innovation at Bayernets GmbH, in an interview with energate. In order to build a hydrogen network quickly and cost-effectively, it makes sense to use existing natural gas pipelines. To ensure security of supply with natural gas at the same time, a national hydrogen grid company would have to work closely with the gas grid operators and create new interfaces and establish the necessary processes for this, Jacobi explains. A national hydrogen grid company would thus be starting from scratch, so to speak, and would also be competing with the gas grid operators for the already scarce specialist staff.


Aiwanger: Grid operators would lose perspective for the future


Germany's economics minister Robert Habeck (Greens) has proposed the foundation of a national grid company with state participation in the context of the update of the National Hydrogen Strategy. A state participation could ensure the financing of the necessary investments at favourable conditions, according to a statement from Berlin. For Bavaria's Minister of Economic Affairs and Energy, Hubert Aiwanger (Free Voters), the federal government is "on the wrong track". "Surely we must use the existing natural gas networks and the expertise and staff of the current natural gas network operators and convert these structures step by step to hydrogen, instead of believing that the federal government can do everything better," Aiwanger said in December.

If the federal government sticks to its proposal, a Germany-wide start-up network would no longer be feasible in this decade, he warned. Grid operators who would be forced to sell their hydrogen grids to a state-owned company would no longer have an incentive to invest in grid expansion. They would lose any prospect of a climate-neutral future for their business.


Bayernets is pushing ahead with the project 'HyPipe Bavaria - The Hydrogen Hubto build a Bavarian hydrogen grid. It is to start this decade with clusters in the industrial regions of Burghausen and Ingolstadt and, in a second step, connect other regions such as Munich and Ulm via various pipelines. "The resulting hydrogen transport network with a length of around 300 kilometres can be used by all market participants without discrimination," explains Stefanie Jacobi.

Bayernets is using existing natural gas pipelines for 95 percent of this. "Through our integrated planning processes and network modelling, we can continue to guarantee the secure transport of natural gas and at the same time build a high-performance hydrogen transport network," argues the Bayernets network strategist. How a newly founded hydrogen network company without knowledge of the plants and processes is supposed to manage such a conversion, on the other hand, is completely unclear.


Jacobi does not accept that a state-owned company should improve the financing of the infrastructure. There is sufficient equity and debt capital available "as soon as the amortisation risk has been solved for the unlikely event that the hydrogen ramp-up does not succeed as expected". The German Energy Agency has developed a model with which this risk can be removed. According to this model, the state would not have to put up any money, but would only have to act as an insurance company. "It can significantly influence the risk of the insured event occurring by providing the right legal framework," says Jacobi.

In a recent interview with energate-Gasmarkt, Daniel Muthmann, Head of Corporate Development, Policy and Communications at Open Grid Europe (OGE), also complained about the lack of commitment on the part of politicians in this regard. The transmission system operators lacked a framework for investment security and a clear mandate to be able to make final investment decisions in the next twelve months, Muthmann said. This threatens to widen the gap between the hydrogen targets and the way to achieve them (energate reported), he said.


Munich steps in with start-up financing


As far as the hydrogen hub 'HyPipe Bavaria' is concerned, the project did not make it onto the list of federally funded IPCEI projects, as the Bavarian cabinet had to find out last November. The Free State of Bavaria has therefore set aside 100 million euros to provide start-up financing. Details are not yet known to Bayernets, says Jacobi. /tc