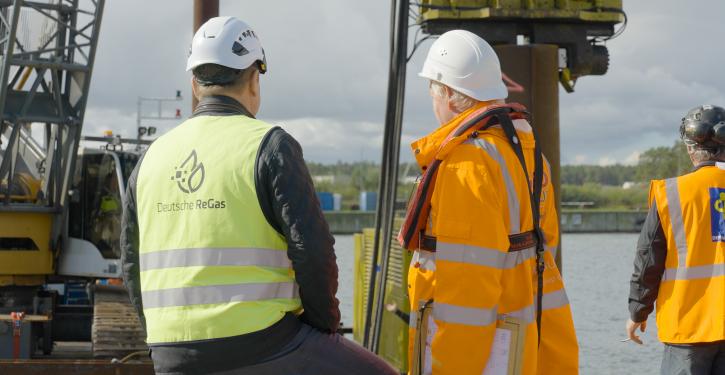 The trial operation at the future LNG terminal in Lubmin is very complex, many processes have to be tested. (Image: Deutsche ReGas/Christian Morgenstern)
Lumbin (energate) - Before the turn of the year, the first liquefied natural gas (LNG) arrived in the industrial port of Lubmin, where the LNG tanker 'Coral Furcata' landed with its first cargo on 30 December, the terminal operator Deutsche Regas announced. This is a so-called carrier ship that can transport up to 10,000 cubic metres of LNG. It had previously called at the tanker 'Seapeak Hispania', which is moored off the coast of Rügen and acts as an interim storage facility, and took on the LNG there.


Deutsche Regas will initially use the liquefied natural gas mainly for cooling down the systems in the terminal and for technical tests. It could take a few days until the necessary temperature of minus 163 degrees is reached, it said. The company received the corresponding permit for the trial operation on 22 December (energate reported). This means that the operator can theoretically feed gas into the transmission network via the terminal ship 'Neptune' for four hours a day.

"Naturally, the first quantities of LNG will also be regasified as part of the trial operation and transferred as gas to the network operator Gascade. But we don't want to call this an injection, as it could create false expectations," Stephan Knabe, chairman of the supervisory board of Deutsche Regas, explained. The actual feed-in will only begin with commercial operation. However, the last permits for this are still missing.


The trial operation that is now beginning is very extensive and complex, they said. This is mainly due to the concept for the LNG terminal, for which Deutsche Regas has basically taken the 'S' out of the FSRU (Floating Storage and Regasification Unit). Because the Lubmin industrial port does not have the necessary depth in all places, the 'Neptune' is only used for regasification. Intermediate storage is again handled by an FSU (Floating Storage Unit) anchored offshore in the Baltic Sea. Smaller shuttle ships bring the LNG from there to the Neptune. The Coral Furcata is one of three smaller tankers that will transport the liquefied natural gas through the shallow Greifswald Bodden in the future.

These special procedures at sea had to be rehearsed in detail, said Deutsche Regas. The manoeuvring of the carrier ships in the port of Lubmin and the interaction with the tugboat crews must also be practised in reality. So far, the parties involved have only done this on the basis of simulations. /ml