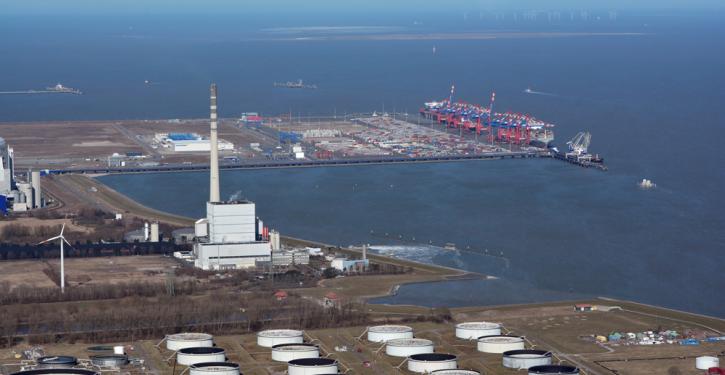 In the future, hydrogen will not only be imported but also produced in the emerging Wilhelmshaven Energy Hub. (Image: JadeWeserPort-Marketing GmbH & Co. KG)
Berlin/Oldenburg (energate) - The Oldenburg-based energy group EWE wants to build a 500 MW electrolyser in Wilhelmshaven together with the hydrogen company Tree Energy Solutions (TES). The two companies have now signed a corresponding memorandum of understanding. The plant in the Wilhelmshaven 'Energy Hub' is scheduled to go into operation in 2028, the project partners announced. EWE and TES want to operate the electrolyser jointly. In addition, an expansion is already planned for the future, with the capacity of the plant to increase to 1,000 MW. The 'Energy Hub' is strategically located on the North Sea coast, which makes it easier to use offshore wind power to produce green hydrogen, they said.

TES, in which the energy company Eon has a stake, is building an onshore terminal for green gas in Wilhelmshaven. The terminal is to be available in 2025. Among other things, the company wants to use CO2 there as a carrier medium for hydrogen within the framework of a circular economy. Together with EWE, TES is also working on plans to use the oxygen from the future electrolyser in other processes to generate green energy. /ml