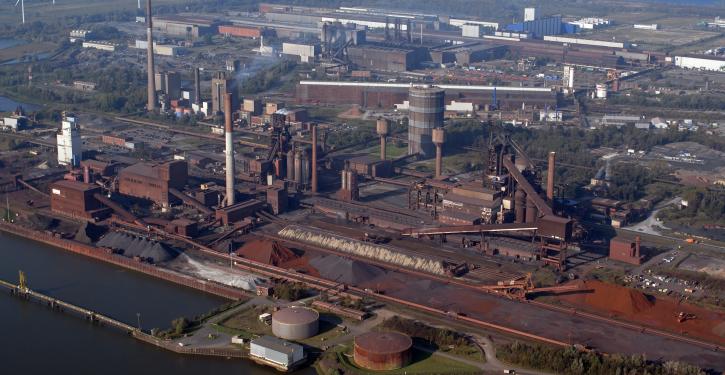 Steelworks consume a lot of energy, in future mainly hydrogen and electricity. (Image: ArcelorMittal)
Berlin (energate) - In order for industry to reach its interim goal on the path to climate neutrality in 2030, companies must already start rebuilding now. Process heat, for example, will have to be supplied by electric plants in the future. By 2030, this will drive up the industry's electricity demand to 228 TWh, explain the research institutes that created long-term scenarios on behalf of the Ministry of Economics. In the target scenario of 2045, industry will consume 357 TWh of electricity. In another scenario, which focuses more on hydrogen, the sector still consumes 217 TWh of electricity. In this scenario, the demand for hydrogen grows to 29 TWh in 2030, then to 215 TWh by 2045.

The industry's hunger for energy thus remains unabated. The authors of the study assume that companies will use materials more efficiently and that gas will be recycled as a basic chemical material via a circular economy. The demand for products is also declining according to the assumptions of the Fraunhofer ISI. Nevertheless, the economy continues to grow and battery production in Germany is a new consumer.

In 2030, the final energy consumption of industry will amount to over 600 TWh of electricity, the scenario creators predict. For this, they have assumed that industry will not relocate any sites abroad due to carbon leakage. They leave plants where they are located today. The researchers have ruled out the possibility of companies moving to locations within Germany where there is a lot of renewable energy or where there are particularly favourable electricity prices under a different regulatory framework.


For the steel industry, the Fraunhofer ISI assumes a lower demand for crude steel and rolled steel. Secondary steel, on the other hand, would gain in importance in the sense of a circular economy. The steelworks are converting their processes to direct reduction of iron ore with hydrogen, and natural gas is being used as a transitional measure. The important thing here is that every blast furnace that is still active must be replaced by a direct reduction plant after its service life has expired.

For the cement industry, the Fraunhofer ISI partly assumes electrification. Other fuels, biomass, hydrogen and green methane also supplement electricity in the cement plants to varying degrees, depending on the scenario. In basic chemicals, companies could generate steam electrically, with varying amounts of hydrogen and other green gases added depending on the scenario. In the case of ammonia, for example, direct conversion to green hydrogen would be worthwhile.


Conversion of natural gas pipelines to CO2 use


Hydrogen and electrification alone are not enough to achieve climate-neutral industry by 2045. According to the Fraunhofer Institute, it is also indispensable to utilise CO2 as a material and even to store it. CO2 would become a raw material for industry, for example for the production of methanol based on hydrogen. This opens up the possibility of repurposing today's natural gas networks. In its scenarios, the Fraunhofer ISI proposes a CO2 pipeline network along the gas pipelines. A partial conversion is theoretically possible. The institute also presupposes other conditions for a climate-neutral industry. Particularly important is a strong expansion of renewable energies.

In recent years, greenhouse gas emissions from industry have stagnated. For the sector to achieve its climate goals, this must now change. By 2030, industrial companies must reduce their emissions by an average of 35 per cent compared to 2021. That is 63 million tonnes of CO2 equivalents less. In 2045, 5 per cent of today's emissions would still remain, according to the researchers. In addition to the Fraunhofer ISI, the consultancies Consentec and Ifeu as well as the Technical University of Berlin (energate reported) are working on the long-term scenarios for, among others, the industrial sector, the building and transport sectors, and renewable energies. /kj