Germany is not hydrogen-ready 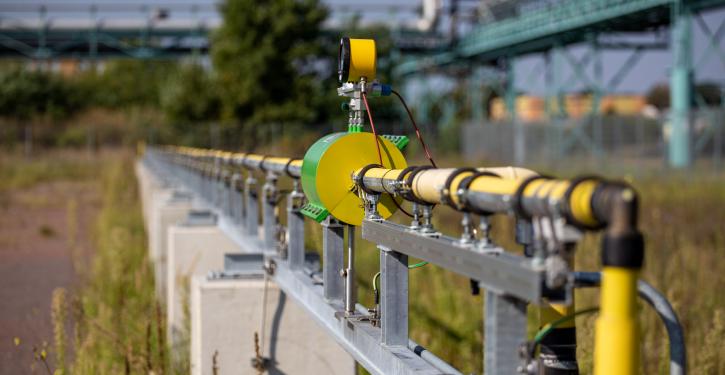 Hydrogen networks are still scarce - and according to the H2 balance, there are also gaps in production and import. (Image: Zukunft Gas)
Essen/Berlin (energate) - As things stand today, Germany is still a long way from achieving its hydrogen targets. This is the result of the current H2 balance that the company has compiled with the Energy Economics Institute at the University of Cologne (Ewi). The shortfall is evident in domestic production, imports and transport infrastructure, Eon said, adding that the H2 balance sheet is thus a wake-up call for politicians and should be regularly updated in the future. "We will now let this alarm clock ring every six months," announced Patrick Lammers, member of Eon's management board, at the presentation of the results.

The data basis of the H2 balance is formed by current hydrogen projects, which Ewi has researched and entered into a database, explained Eren Çam, head of the raw materials department at Ewi. Only publicly available information was used and only electrolysers with a size of 100 kW or more were taken into account. The snapshot shows that 33 hydrogen projects with a total capacity of 65 MW are in operation as of July 2022. The average project size is thus 2 MW. By the end of 2030, from today's status, there will be 66 projects with 5,607 MW. "There is a clear trend towards the development of larger projects," says Çam. The average for 2030 is 85 MW - if you only consider the projects from 2023 onwards, the average is even 190 MW. But the current efforts are far from sufficient to achieve the German government's hydrogen target of 10,000 MW of domestic production.


According to the H2 balance, the production of green hydrogen will increase from 166,400 kWh in 2022 to 15.5 billion kWh or 460,000 tonnes by 2030. The estimate is based on the assumption that the efficiency of the plants will improve from 64 to 69 per cent and that the plants will run for 4,000 full-load hours a year. This shows a "significant growth" in hydrogen production, which will increase by a factor of 93, according to Çam. Based on the Dena lead study, which assumes a hydrogen demand of 66 billion kWh by 2030, the import gap as of today is still 50.5 billion kWh. "Imports are not relevant today," says the Ewi manager. There are initial bilateral agreements with Australia, Qatar, Canada, Israel, the United Arab Emirates and countries in Africa. But there is a long time span for the start of the projects. Some could start production as early as 2027, while others would take until 2035 at the earliest.

The study also found a large discrepancy in the infrastructure. The hydrogen network in operation today covers just 417 kilometres. This compares with 41,600 kilometres of natural gas pipeline network. According to Gabriël Clemens, CEO of Eon's green gas unit, there are about 400 kilometres from Wilhelmshaven to Bitterfeld alone. The discrepancy is even more pronounced when the distribution network is included. In the SME sector, too, there are many companies that rely on temperatures in production that cannot be reached with electricity. As a rule, these businesses do not have a direct connection to the transmission grid. A grid extension of 2,273 kilometres is currently planned until 2030.


Great uncertainty in the market


According to Eon board member Lammers, the fact that there are such large gaps to the targets in the various areas is mainly due to the uncertainty in the market. At EU level, there is still no definition of green hydrogen, he said. The EU Commission's proposal for unbundling does not allow natural gas and hydrogen networks to be managed within one company in the long term. Germany must exert pressure in Brussels to find a pragmatic solution, Lammers demanded. In Germany itself, he said, the government must create a financing framework for investments in hydrogen projects and support companies in the conversion to green energies in terms of operating costs.

In addition, Eon demands an acceleration in approval procedures, as is already a reality for LNG projects and planned for wind and solar projects. With a view to international competition, Eon managers see Germany at a crossroads and urge haste. With the Inflation Reduction Act, the USA has improved investment conditions in its own country so much that the entire production of electrolysers could be delivered to the United States, says Clemens. Europe would then fall behind and end up having to import all the hydrogen. With the end of Russian gas, Lammers said, there is still a time horizon of three to five years until important industries move out of Germany. For this reason, too, the hydrogen ramp-up must be accelerated. /tc