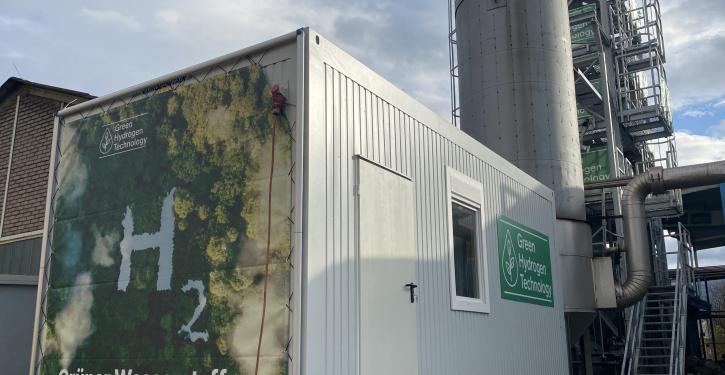 The plants are expected to produce around 5,000 tonnes of green hydrogen annually. (Image: Green Hydrogen Technology)
Augsburg/Leoben (energate) - The start-up Green Hydrogen Technology (GHT) from Augsburg has built a pilot plant for the production of green hydrogen in Leoben (Styria). Here, climate-friendly hydrogen is to be produced on an industrial scale with the help of sewage sludge, plastic and wood waste. The future plants are designed for an annual production capacity of up to 5,000 tonnes of H2, the company announced. The process developed by GHT is particularly interesting for the municipal sector, as they usually have sewage sludge or plastic waste due to their waste disposal mandate, stated Harald Mayer, managing director and co-founder of the company.

With the technology, hydrogen can be produced cheaply on site and marketed competitively, Mayer said. H2 production costs are around two euros per kilogram, according to the company. In addition to municipal companies, which can use the hydrogen for CO2-neutral operation of local public transport, other possible customers for the climate-friendly H2 include energy suppliers and energy-intensive industrial companies. GHT is currently in talks with investors in preparation for a first round of financing.


The process developed to generate hydrogen goes through three phases, GHT explained. In the first phase, so-called hot gas is produced by burning sewage sludge or biogas. In a second phase, plastic or wood waste is added to the gas for thermal utilisation. The resulting hydrogen is further processed in a final phase to green hydrogen with an efficiency of 99.9 per cent, the company informed.

Another advantage of the process is that the phosphorus contained in sewage sludge landfills is separated as part of the process, GHT commented. According to the German Federal Environment Agency, the Sewage Sludge Ordinance will require the recovery of phosphorus contained in sewage sludge in the coming years. Phosphorus is not only of central importance as a fertiliser in agriculture, but is also used in the production of nanomaterials due to its good semiconductor properties. /af