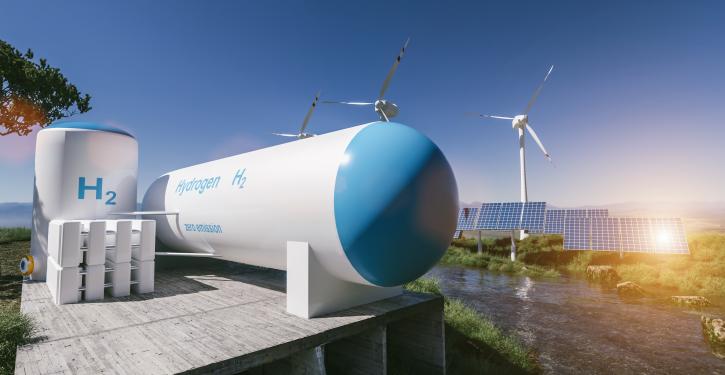 According to the VDE, only 10 per cent of H2 projects are being implemented due to unfavourable framework conditions. (Image: Shutterstock/AA+W)
Offenbach am Main (energate) - The German electrical engineering association VDE is calling for the removal of existing hurdles to the rapid ramp-up of a green hydrogen economy. According to the association, the "traditionally highly regulated energy markets" are unsettling industry and the financial world. An economic evaluation of corresponding investment projects is only possible to a limited extent, the association said. With a white paper now presented, the VDE wants to advance the discussion. While the appropriate framework is still lacking, the commitment is growing, it says. For example, more than 680 major projects with a total volume of 240 billion dollars are planned by 2030. According to the VDE, this shows two things in particular: the worldwide trend towards hydrogen in the energy sector on the one hand and the uncertainty on the other.

One reason for the uncertainty is the fact that of the more than 680 projects, only half are currently in the planning phase - and only ten per cent are being implemented. The VDE is therefore pushing for a "rapid introduction of the necessary regulations as well as uniform approval processes throughout Europe" - an important prerequisite for the financeability and insurability of the new products and business models from the association's point of view.


Switzerland as a role model


The authors of the white paper cite, among other things, the "very high heavy vehicle fee" on motorways in Switzerland as a positive example. The tax is four times higher than in Germany and does not apply to emission-free trucks. This allows for a functioning business model and a rapid market introduction of zero-emission drives.

The association is convinced that state subsidy programmes make sense and should be expanded and adapted. For the hydrogen ramp-up - unlike other innovations - high investments over long periods of time are necessary, since the technology does not serve an already existing ecosystem. However, the potential in Europe is great - also for green hydrogen with regional green electricity. A high availability of electricity from wind power plants with increasing, temporary surpluses makes hydrogen production on the coast attractive. The VDE therefore calls for a "generally technology-open industrial policy". The 28-page white paper is available online after providing personal data. /dz