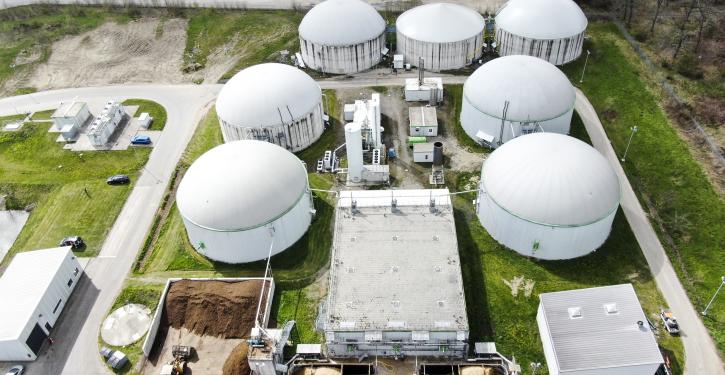 The companies are silent on what Macquarie is paying for the takeover of Baywa Re's biogas subsidiary. (Image: Baywa r.e.)
Munich (energate) - Project developer Baywa Re is divesting its bioenergy division. The buyer is the Australian infostructure investor Macquarie. The parties have agreed not to disclose the purchase price, energate was informed. Macquarie is completing the full takeover of Baywa Re Bioenergy GmbH via a fund. The cartel authorities had already approved the transaction. The Baywa subsidiary is taking this step in order to focus more strongly on its core business of wind and solar energy, explained Baywa Re's CEO Matthias Taft. Baywa Re's strategic shift towards offshore wind power, which was completed in 2022, fits in with this.


In view of the gas crisis in Europe, the Australians, for their part, see great potential in the purchase of Baywa Re Bioenergy. In order to minimise dependency on natural gas, the Australians estimate that around 80 billion euros will flow into the construction of new biogas plants in the EU markets by 2030. The aim is to use the tailwind of the EU's Repower EU programme to tap into this growth market and to further develop the technology of the new acquisition, announced Macquarie fund manager Chris Archer. The Australians are also targeting industrial customers. With the Regensburg-based bioenergy division of Baywa Re, the investor will in future have five operating biogas plants in Germany, which, according to the company, will produce 140 million kWh of biomethane annually.

A large part of this is from a plant in Horn-Bad Meinberg, North Rhine-Westphalia, which Baywa Re took over in 2020 to increase annual production from 60 million kWh of biomethane at the time to 80 million kWh. The company is also currently active in Italy as a project developer. Most of the biogas plants were sold on by the wholly owned subsidiary of Baywa Re after development. To date, the company has built a total of 41 biogas plants with 132 MW.


Macquarie is adding the new acquisition to the portfolio of a Luxembourg-based fund of the Macquarie Green Investment Group (GIG). In the gas sector, the Australians have recently mainly acquired network operators, including Thyssengas and the gas division of the British National Grid. Macquarie has also recently become an investor in Deutsche Regas. The company is the operator of the floating LNG terminal "Deutsche Ostsee" in Mecklenburg-Vorpommern, which is currently under construction. /pa