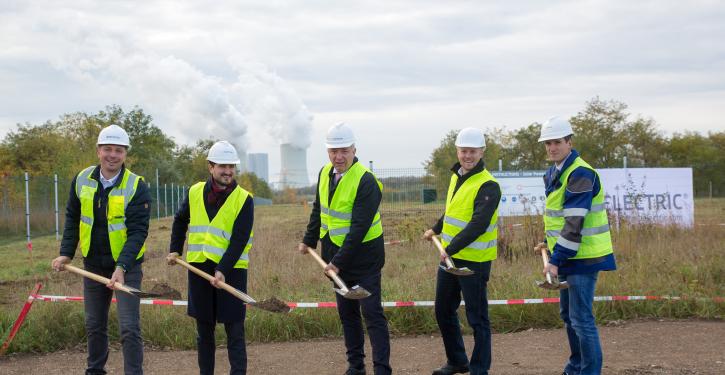 The groundbreaking ceremony for a solar park has taken place: Leag is working flat out on the conversion of its generation portfolio. (Image: LEAG)
Cottbus (energate) - The eastern German energy company Leag is continuing to restructure its generation portfolio, away from coal and towards renewable energies. The company announced progress on two solar projects on recultivation areas of old opencast mines. Firstly, the power plant operator received the green light from the Cottbus city council for a floating PV plant on the Cottbus Baltic Sea. Leag and its sister company EP New Energies (EPNE) now intend to submit the building application before the end of this year, they announced. With an output of 21 MW, the plant is to become the largest floating solar plant in Germany. The partners expect an annual production of 20 million kWh. The Cottbus Baltic Sea was created by flooding the former Leag open-cast mine Cottbus-Nord.

A solar project on recultivation areas of the Lippendorf lignite-fired power plant has progressed further. An open-space plant with a capacity of 17 MW is to be built there on the site of a former industrial settling plant for power plant ash in Böhlen (Saxony). Construction has now started, Leag announced. EPNE is also acting as a strategic partner in this project. Both companies are subsidiaries of the Czech energy group EPH. With the Gigawatt Factory concept, Leag has set itself the goal of transforming its own generation portfolio from lignite to renewable energies by 2030. By the end of the current decade, the company wants to connect 7,000 MW of renewable generation capacity to the grid on old opencast mining sites in Lusatia. According to the company, more than 1,000 MW is already in the approval process. /rb