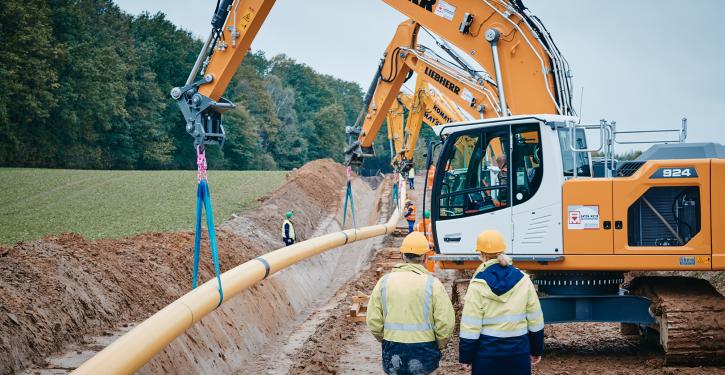 "Green Octopus" is intended to bring hydrogen primarily to the economic regions in central Germany. (Image: VNG/Ontras)
Leipzig (energate) - The planned hydrogen pipeline "Green Octopus Mitteldeutschland" of the transmission system operator Ontras has hurdled a decisive obstacle. It is to receive government start-up funding under the Important Projects of Common European Interest (IPCEI). On 15 September, Stefan Wenzel, Parliamentary State Secretary at the Federal Ministry of Economics, and Lower Saxony's Prime Minister Stephan Weil (SPD) signed an agreement to this effect, Ontras announced. The hydrogen pipeline, which is around 300 kilometres long, is to connect the Salzgitter steel region with the Helmstadt mining area and the central and eastern German economic regions from 2029 onwards, and will also include the future Bad Lauchstädt hydrogen storage facility. "In this way, we offer access to further import points, domestic feed-in centres and storage facilities," Ontras Managing Director Uwe Ringel explained. The company boss also emphasised the importance of government support. "Only supported by the companies, projects of this magnitude could not be realised," Ringel said.

In Lower Saxony alone, Ontras wants to build around 47 kilometres of new steel pipeline between Salzgitter and Hötensleben (Saxony-Anhalt) as part of "Green Octopus" (GO!). However, the network operator wants to create the majority of the new hydrogen infrastructure by converting existing natural gas pipelines. Together with "Doing Hydrogen", "GO!" will form Ontras' approximately 900-kilometre-long hydrogen start-up network. Of these, 544 kilometres are natural gas pipelines to be converted, and the company wants to build another 377 kilometres by 2030. In future, the pipelines will connect major economic regions between Rostock, Berlin, Eisenhüttenstadt, Magdeburg, Leipzig-Halle and Salzgitter and supply them with hydrogen.

So far, the EU Commission has only approved a part of the IPCEI funding, which is worth billions, and many projects are still waiting for approval. /ml