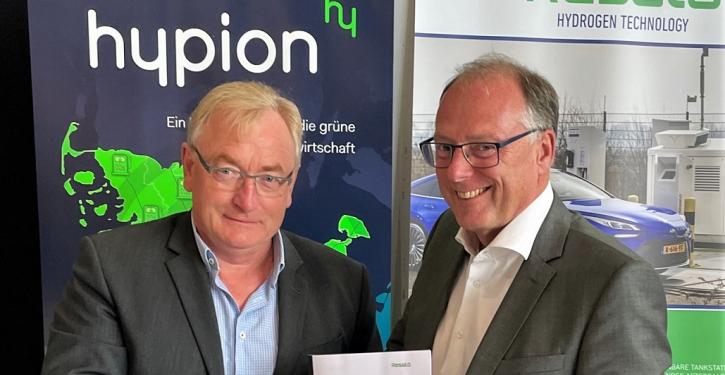 Hypion's managing director Harro Possel and Robert Castien, CEO of Resato International, at the signing of the contract. (Image: Hypion)
Neumünster (energate) - A hydrogen filling station for heavy goods vehicles is to be built in Neumünster, Schleswig-Holstein. The hydrogen joint venture Hypion is implementing the project together with the Dutch supplier Resato Hydrogen Technology. Corresponding contracts between the two companies have now been concluded. After a preparatory period of about two years, the project is now to be implemented immediately, Hypion announced. The goal is to enable the companies of the emerging "H2 Hub Neumünster" to refuel for the first time in the second quarter of 2023.

The Federal Ministry for Digital Affairs and Transport is supporting the overall project in the northern German business park. It also includes the procurement of green hydrogen, logistics and distribution at filling stations, right up to its use in heavy vehicles. The participating partner companies in the "H2 Hub Neumünster" already received funding at the beginning of the year to procure the first heavy trucks based on fuel cell electric drives. In addition, the stakeholders are jointly investing a double-digit million amount to develop the location as a hydrogen hub.


This is because more vehicles are to be added, so that 5 million heavy-duty kilometres and thus a CO2 reduction of more than 3,700 tonnes per year can be achieved via the public refuelling infrastructure. "Only with a new order of magnitude of several hundred kilograms of H2 turnover per day can economic viability be achieved," explains Stefan Rehm, project manager at Hypion GmbH. Accordingly, the project is intended to provide an impetus to introduce clean freight transport with green hydrogen to the market, says Rehm.

The cooperation between Hypion, in which the Eon subsidiary Hansewerk, among others, is involved, and Resato is intended to go beyond this first filling station. Together, the companies want to build a network of at least ten petrol stations in Schleswig-Holstein. Lübeck has already been selected as an additional location (energate reported). /ml