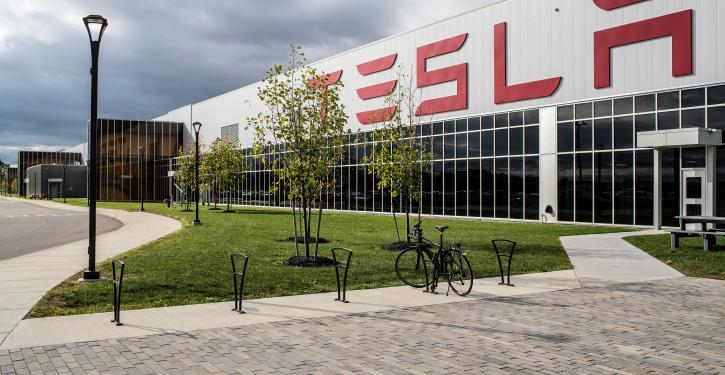 The US e-car manufacturer may not build battery cells in Brandenburg after all. (Image: Tesla)
Grünheide (energate) - The US e-car manufacturer Tesla is apparently reconsidering its plans to produce traction batteries in Grünheide, Brandenburg. The Ministry of Economics of the state of Brandenburg confirmed on request that it had "received initial information on this" on 15 September. "It seems possible that Tesla will reprioritise individual process steps in the plants, but that the Grünheide site will be retained in its structure and with its jobs," a ministry spokeswoman explained to energate.

Actually, company boss Elon Musk wanted to produce battery cells as well as electric cars in a "Gigafactory" in Grünheide. In March, Musk had received permission for the production which was supposed to start in 2023 - but now things could change. The reason for this is financial incentives in Tesla's home market within the framework of the Inflation Reduction Act (IRA), as the Wall Street Journal first reported. According to the report, buyers of an electric car in the USA can expect a government subsidy of the equivalent of more than 7,500 euros. One of the conditions is that the battery of the vehicle must be largely made in the USA.


The spokeswoman of the Brandenburg's economics ministry also points to the imbalance created by the IRA, saying that the IRA, the main features of which have been under discussion since July, would lead to a competitive disadvantage in Europe. "The EU must react in terms of state aid law to re-establish a level playing field," she said The production of e-cars at the Grünheide plant has been running for several months. Around 12,000 jobs were originally to be created. But battery cells will be made in Brandenburg even without Musk. The Chinese battery manufacturer Svolt Energy Technology recently announced its intention to open a cell production plant in Lauchhammer in Brandenburg. /dz