Electrolyser in Wunsiedel goes into operation 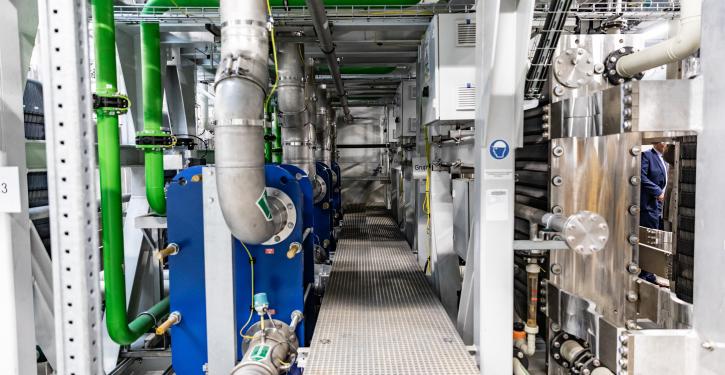 In future, the electrolyser in Wunsiedel will produce 1,350 tonnes of green hydrogen. (Image: Siemens)
Wunsiedel (energate) - After about a year of construction, Bavaria's largest electrolyser to date has gone into operation in Wunsiedel. Minister President Markus Söder (CSU) and Siemens CEO Markus Rebellius officially started the 20 million euro plant on 14 September. The general contractor Siemens announced that the commercial production of hydrogen has now begun at the Wunsiedel Energy Park. In the first step, the electrolyser based on PEM technology will produce up to 1,350 tonnes of green hydrogen. The plant, supplied by Siemens Energy, has a total capacity of 8.75 MW, but is expected to grow to 17.5 MW in the future. The first talks on this have already been held, it was said.


The plant will be operated by the company WUN H2, in which Siemens holds a stake as well as Rießner-Gase from Lichtenfels in Bavaria (45 per cent each) and Stadtwerke Wunsiedel with ten per cent (energate reported). The green hydrogen is to be used primarily in industrial and commercial enterprises in the region. The customers are broadly diversified, from the glass and ceramics industry to transport companies and automotive suppliers to the neighbouring sawmill. They are to receive the hydrogen within a radius of up to 200 kilometres, mainly by truck.


In the future, the Wunsiedel Energy Park is to grow further. The construction of an H2 filling station is planned for 2023. In addition, the electrolyser is to be more closely networked with the existing Siemens battery storage facility and the neighbouring industrial companies, so that they can, for example, use the waste heat or the oxygen split off during electrolysis. The Bavarian state government wants to support these projects in the Fichtelgebirge region scientifically with a "Future Energy Lab". Prime Minister Söder promised 15.5 million euros of support for this on the occasion of the official commissioning. "Franconia is already Bavaria's number one in hydrogen. All of Bavaria is proud of what has been created here," Söder said via the short message service "Twitter". /ml