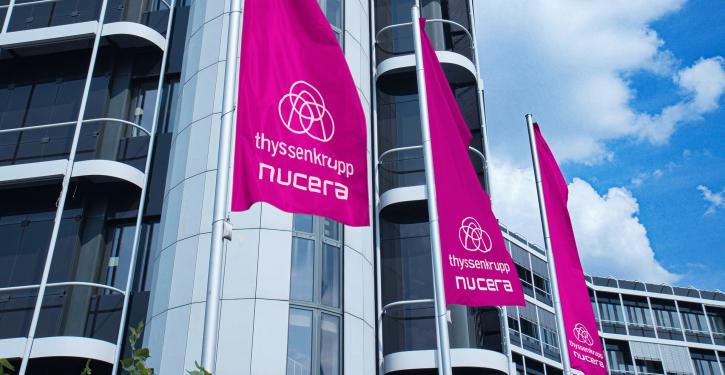 The Executive Board of thyssenkrupp has taken the investment decision on a direct reduction plant. (Image: thyssenkrupp AG)
Essen/Duisburg (energate) - Steel manufacturer Thyssenkrupp has decided to build its first direct reduction plant at its Duisburg site. The executive board has given the green light for the investment of more than 2 billion euros, the company announced. In a future hydrogen economy, the steel industry with its direct reduction plants is considered one of the largest consumers of the valuable molecule. However, the investment is still conditional - if there is no public funding, the company will withdraw the decision, it said. The funds for this still have to be approved by the EU Commission, a spokesperson told energate. In addition to a subsidy for the construction costs, the industrial group also expects support for the operating costs. Thyssenkrupp had already announced the investment decision in June at the BDEW congress and referred to pending public funding decisions (energate reported).


Natural gas and, in the future, hydrogen instead of coking coal


In the direct reduction plant, the group will produce 2.5 million tonnes of directly reduced iron annually from 2026. The company will award the contracts in autumn this year. Originally, the plant's capacity was planned to be smaller. But due to the rapidly rising CO2 price and an earlier anticipated demand for green steel, Thyssenkrupp wants to cut CO2 emissions more quickly. The direct reduction plants replace the existing blast furnaces, which use coal as a heat source. Instead of coking coal, the steelmaker will initially use natural gas. "We assume that the amount of natural gas and the natural gas prices will allow us to have viable solutions when production starts," the spokesperson stated.

Once there is enough hydrogen in the market, the conversion of the direct reduction plant will then take place. The direct reduction process does not use CO2-intensive coal, but it consumes a lot of electricity. For the energy supply, the Essen-based industrial group recently signed a letter of intent with the energy company BP. The British company could supply green or blue hydrogen in the future as well as offer long-term power purchase agreements of wind and solar power (energate reported). Further talks are underway with other utilities such as RWE to secure the required capacities through various projects, the spokesman said. /kj