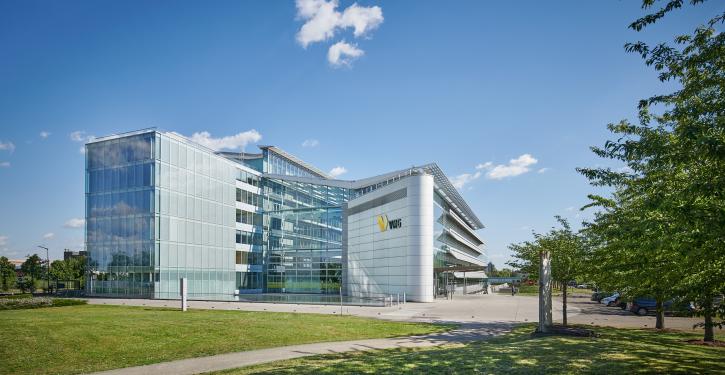 VNG has submitted an application for state aid under section 29 EnSiG. (Image: VNG AG/Torsten Pross)
Leipzig (energate) - The federal government is to save the Leipzig gas importer VNG from insolvency. The EnBW subsidiary has now applied for state aid under section 29 of the Energy Security Act (Energiesicherungsgeset, EnSiG). The reason for the company's difficulties are two supply contracts that are affected by Russian supply shortfalls and are no longer being serviced as agreed, the company announced. In order to meet its own delivery obligations, the importer must now procure these quantities at considerably higher prices on the energy markets. Until the start of the Russian war of aggression, VNG had been "a very healthy group of companies", which had now slipped into an increasingly critical financial situation "through no fault of its own", it said. Federal Economics Minister Robert Habeck (Greens) promised rapid assistance: "VNG has officially said today that they need state support, and we will get it," Habeck stated. "We are on a very, very good path, and this will be clarified promptly." Both sides were cagey about the amount.


VNG is Germany's third-largest gas supplier and, in addition to around 400 municipal utilities, mainly supplies larger industrial customers with gas. In 2021, the group supplied around 20 per cent of Germany's total gas demand, which it sourced from Russia. In detail, there are two contracts that now fall on the gas trader's feet. One is a direct contract with Gazprom Export and has a volume of around 35 TWh of gas per year. This contract is currently no longer being served and will not be for the foreseeable future, VNG said. However, this is only the lesser evil, as an EnBW spokeswoman told energate. On the one hand, this contract expires at the end of the year anyway. On the other hand, due to the smaller volume in combination with the relief from the gas levy expected from 1 October, VNG would be able to absorb the expected losses on its own. The company puts these at around 1 billion euros for the current year.


Contract with WIEH for 65 TWh per year


The bigger problem for the company, however, is the second contract with a "domestic upstream supplier" for gas purchases of about 65 TWh per year. According to energate information, this must be Wintershall Erdgas Handelshaus (WIEH). WIEH has been supplying VNG with Russian natural gas since the 1990s; the current contract has been running since 2013 and does not end until 2030. Since mid-May, WIEH, whose supplier is Gazprom Export, has not consistently fulfilled these contractual obligations. The background is complicated: WIEH is now a subsidiary of Securing Energy for Europe (Sefe, formerly Gazprom Germania), which is why Russian counter-sanctions have applied to the trading company since May of this year. These prohibit Gazprom Export from supplying WIEH, which prompted the company to stop supplying VNG.


With the support of the German government, ways have been sought in recent weeks to bring about a final settlement between the two parties. In the meantime, however, the dispute between VNG and WIEH is already occupying the courts in various instances. According to the latest ruling by the Frankfurt Regional Court (Landgerichts Frankfurt) on 29 August, WIEH must continue to supply VNG, at least until the Higher Regional Court (Oberlandesgerichts) rules otherwise. In fact, however, this is not happening. "In August, VNG had to bear the costs of the replacement procurement to a considerable extent, contrary to what had been expected before, at historically high gas prices," the company emphasised. This is now no longer economically viable. According to its own information, the parent company EnBW has already provided guarantees and credit lines in the high three-digit million range. In its current half-year financial statements, the parent company already reports a burden of around 550 million euros for the current financial year.

Parallel to the application submitted on 9 September in accordance with Section 29 EnSiG, VNG, together with its majority shareholder EnBW, intends to continue the ongoing talks with the federal government and the municipal shareholders in search of ways to stabilise the company. What these might look like is still open. However, it will probably come down to a negotiated solution, according to legal experts with whom energate spoke. This is also because the general conditions have deteriorated considerably since August: Russia has now completely stopped its deliveries via the Nord Stream route and gas prices have reached an even higher level. After Uniper, VNG is the second company to apply for state aid against the background of the gas crisis. The Federal Ministry of Economics and Technology is responsible for negotiating the stabilisation measures according to Section 29 EnSiG, and decides in agreement with the Ministry of Finance and the Federal Chancellery. /ml/pa