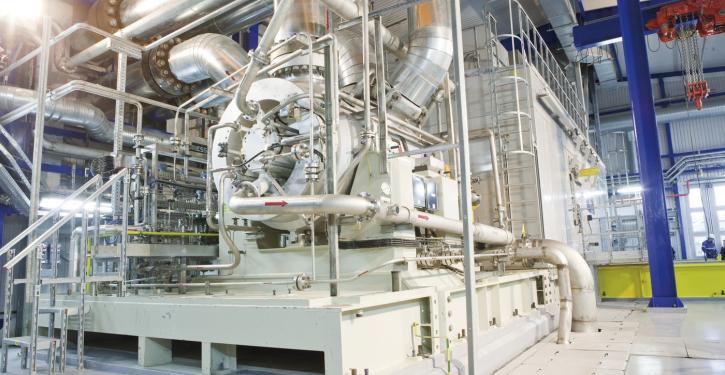 Siemens Energy sees no reason for a delivery stop. (Image: Nord Stream)
Moscow (energate) - Gazprom has completely suspended gas deliveries via the Nord Stream 1 pipeline. During maintenance of the last active turbine at the Portovaya compressor station, oil leaks were discovered, the company announced via Telegram. The faults and damage found did not allow safe, trouble-free operation of the gas turbine plant. Therefore, it was necessary to stop further operations. Similar oil leaks had already been detected in other turbines.

Gazprom says that the damage can only be repaired in a specialised workshop. A letter was sent to Siemens Energy concerning the faults found. Originally, Gazprom had nominated volumes for transport via the Baltic Sea pipeline again for the period after the announced three-day supply interruption (energate reported). However, according to data from Nord Stream AG, Gazprom has now withdrawn this nomination. After the reduction in supply volumes to 40 percent in June and 20 percent in July, it is now possible that no more Russian gas will reach Germany through the Baltic Sea.


Siemens Energy, meanwhile, contradicts Gazprom's statements. "As the manufacturer of the turbines, we can state that such a finding does not constitute a technical reason to stop operations," the company said. According to Siemens Energy, the oil leakage cited by Gazprom also does not prevent the turbine from operating. Moreover, the leakage could be sealed on site, so a repair in a specialist workshop - as stated by Gazprom - is not necessary. In the past, too, there had been no turbine failures in comparable cases. In addition, the company says that further turbines are ready for operation by Nord Stream 1 at the Portovaya compressor station.

Ministry for Economic Affairs is calm


In a first reaction from the Federal Ministry of Economics, it was said that Gazprom's announcement had been taken note of. Russia's unreliability had already become apparent in recent weeks, it said. "Accordingly, we have unwaveringly and consistently continued our measures to strengthen independence from Russian energy imports," a ministry spokeswoman said. She referred to the gas storage facilities, which are now already almost 85 per cent full, a month ahead of schedule. "We are also making good progress with supplies via delivery routes other than Russian pipelines and new landing capacities for liquefied natural gas."

The president of the Federal Network Agency, Klaus Müller, also pointed to the filled gas storage facilities, the planned LNG terminals and the efforts to save energy. "Good that Germany is better prepared by now," Müller wrote on "Twitter". According to the gas storage association Ines, the storage facilities will continue to be filled despite the Nord Stream 1 outage. On the first day of the supply interruption, German gas storage facilities were filled with 611 GWh. On the day before the shutdown, 348 GWh still came via Nord Stream 1. The 85 per cent target will be reached shortly. In order to reach the hoped-for quota of 95 percent filling by winter, however, "great efforts" are required, Ines Managing Director Sebastian Bleschke told energate.

How the markets will react to the supply freeze is still open at the moment. Before the weekend, the day-ahead price had fallen to 181 euros/MWh. /tc/kw/cs