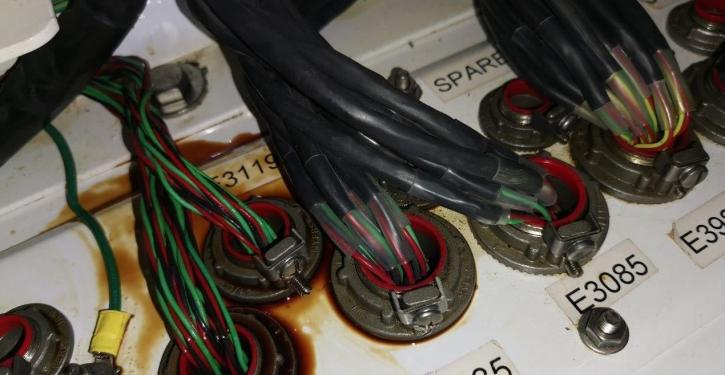 To back up its claims, Gazprom has published a picture purporting to show the damaged turbine. (Image: Gazprom)
Moscow (energate) - Gazprom has completely suspended gas deliveries via the Nord Stream 1 pipeline. During maintenance of the last active turbine at the Portovaya compressor station, oil leaks were detected, the company announced on "Telegram". The faults and damage found did not allow safe, trouble-free operation of the gas turbine plant. Therefore, it was necessary to stop further operations. Similar oil leaks had already been detected at other turbines.

According to the manufacturer Siemens Energy, the damage can only be repaired in a specialist workshop, Gazprom says. A letter regarding the detected malfunctions had been sent to the CEO of Siemens Energy, Christian Bruch. Gazprom has corrected the volumes originally nominated for 3 September according to data from Nord Stream AG.

Ministry for Economic Affairs is calm


In a first reaction from the Federal Ministry of Economics, it was said that Gazprom's announcements had been taken note of. "We do not comment on the matter," a spokeswoman stressed. Russia's unreliability had already become apparent in recent weeks, she said. "Accordingly, we have continued unwaveringly and consistently with our measures to strengthen our independence from Russian energy imports," the spokeswoman added. She pointed to the gas storage facilities, which were almost 85 per cent full, a month ahead of schedule. "We are also making good progress with supply via delivery routes other than Russian pipelines and new landing capacities for liquefied natural gas."

The president of the Federal Network Agency, Klaus Müller, also referred to the gas storage facilities, the planned LNG terminals and the efforts to save energy. "Good that Germany is now better prepared," Müller wrote on Twitter." /tc/kw