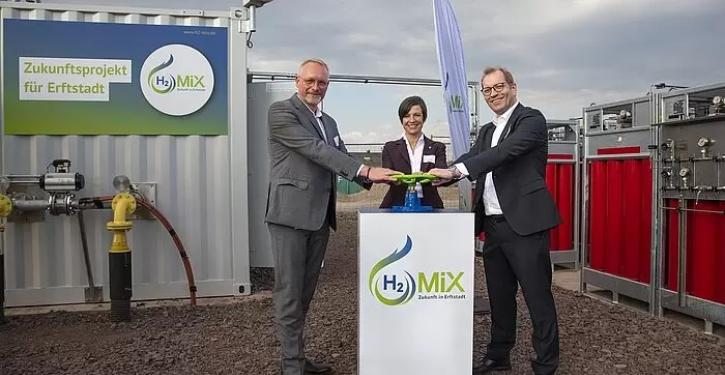 The feed-in plant in the Friesheim industrial estate has already been officially commissioned. (Image: GVG Rhein-Erft GmbH)
Erftstadt (energate) - As part of the "H2-MiX" project, GVG Rhein-Erft will feed hydrogen into the gas grid to supply heat to private households from October 2022. Up to 20 per cent by volume will be added to the L-gas network in three districts of Erftstadt, the energy supplier announced. The "H2-MiX" cooperation project launched with Rheinische Netzgesellschaft (RNG) at the beginning of 2021 is thus entering the next phase. With this project, the two companies want to show that the grids and technical facilities are already equipped for the use of hydrogen. They are supported in this by Tüv Rheinland Energy GmbH.

The hydrogen admixture will take place gradually and will initially start with 10 per cent by volume, they said. After four weeks, it will be increased to 15 and then 20 per cent by volume. "In advance, all gas-consuming appliances in the test area were charged with a test gas containing 23 per cent hydrogen by volume. In this way, we ensured the suitability of every single gas appliance in the project area," project manager Michael Thys from GVG explained. In the further course of the project, the combustion quality of the appliances will be checked with random sample measurements on selected reference appliances, he continued. In addition, special measuring devices from the Swiss company Mems AG were installed to continuously monitor the hydrogen content of the gas mixture at the end customers. Households are to be supplied with the gas mixture for one to one and a half years.


The districts of Niederberg and Borr as well as the Friesheim industrial estate were selected for the project. These are particularly suitable because a modern, nine-kilometre-long gas network was only laid here in 2007. The project partners emphasised that there will be no changes for the connected customers. "The reliable and safe supply of households is guaranteed in the usual way," RNG Managing Director Ulrich Groß stated. /tc