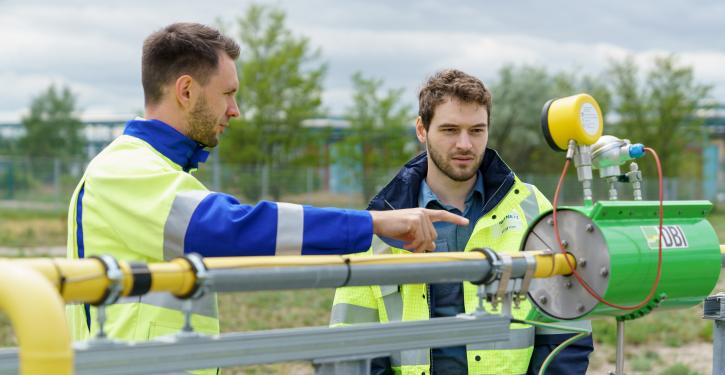 The report gives an overview of the multitude of projects. (Image: Mitteldeutsche Netzgesellschaft Gas mbH)
Berlin (energate) - In their newly published hydrogen report, the transmission system operators make twelve recommendations to the Federal Network Agency and the Federal Government. This year they are to create the legal and regulatory conditions so that the conversion of the gas and the development of the hydrogen networks can begin as soon as possible. Their new argument: the target triangle in Section 1(1) of the the Energy Industry Act (EnWG) is being shaken by the Ukraine war. "Germany will only succeed in continuing to guarantee a secure, low-cost and environmentally compatible energy supply if the conversion of the gas grids - both for the development of new sources and for the transport of hydrogen - is pushed forward as quickly as possible," reads the conclusion of the 55-page paper required by the EnWG (pursuant to Section 28q).

So far, both the Federal Network Agency and the Ministry of Economics have had major reservations about integrated network planning for gas and hydrogen. They do not want to let gas customers pay for the rededication or new construction of hydrogen pipelines via the grid fees - in other words, they reject joint regulation. "In order for our conversion and expansion proposals to be confirmed by the Federal Network Agency and then implemented, we now urgently need a legal anchoring of integrated network planning for gas," insisted the managing director of FNB Gas, Inga Posch. Accordingly, demand two of twelve is the confirmation of an initial network by the Bonn authority, derived from strategic generation and consumption focal points "without further delay". The goal is "financially viable" network fees, especially in the market ramp-up phase (demand 4). For the conversion of grid areas including the customers connected there, the grid operators demand a legal handle (demand 10). In addition, new instruments for better placement of power-to-gas plants and gas-fired power plants are on the wish list (demand 9).


Apart from the demands, the report contains detailed maps and information material on current hydrogen projects. The areas of H2 generation, H2 mobility, industry and heat are broken down. The interim results of the NDP Gas 2022-2032 were also included in the report. According to the survey of network operators, the demand for hydrogen transport had already increased tenfold to 165 billion kWh compared to the last NEP. The figures, however, did not yet reflect the increased requests from customers after the war, it was said in response to an enquiry from energate. The hydrogen report also contains a chapter on the planning of conversion measures in the distribution network, which was prepared in cooperation with BDEW, DVGW, VKU and the "H2vorOrt" initiative. The stakeholders had already presented the Gas Grid Area Transformation Plan - GTP for short - in March. /mt