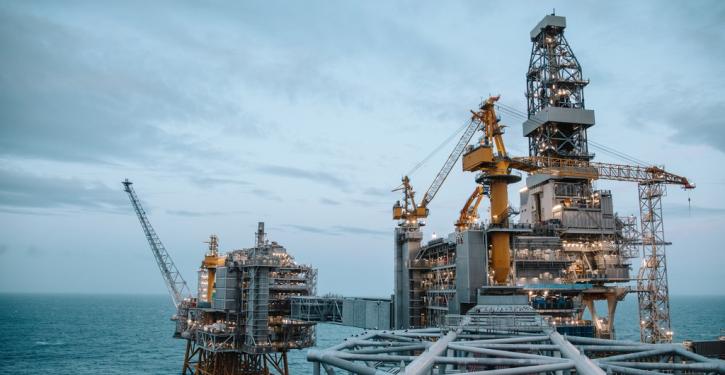 Together with Wintershall Dea, Equinor wants to store large quantities of CO2 in depleted fields. (Image: Equinor/Ole Jörgen Bratland)
Kassel (energate) - Germany's largest oil and gas producer Wintershall Dea and the Norwegian company Equinor are planning a pipeline around 900 kilometres long to transport CO2 to Norway. A corresponding letter of intent for the "NOR-GE" project has been signed. The commissioning of the pipe with "non-discriminatory third-party access" is targeted for 2032. "We will continue our close cooperation and open the next chapter in the German-Norwegian partnership," said Wintershall CEO Mario Mehren.

According to the company spokesperson, the pipeline, whose starting point and destination have not yet been determined, could transport 20 to 40 million tonnes of CO2 annually. This corresponds to about 20 per cent of Germany's total industrial emissions per year. The project partners want to store the environmentally harmful gas in the large depleted deposits or in saline aquifers under the seabed of Norway. They are particularly targeting German industrial companies as customers, for whom carbon capture and storage (CCS) could help them achieve their set climate targets. In Wilhelmshaven, Wintershall Dea is planning a collection point for CO2, which will also be examined in the joint feasibility study with Equinor, the spokeswoman said. She did not give details on the costs.


For storage under the seabed, the companies need licences from the Norwegian government. Here, too, cooperation is planned. The joint application should cover about 15 to 20 million tonnes of CO2 per year on the Norwegian continental shelf, the two companies announced. "We have already applied for our first CO2 storage licence for the Luna field in December 2021 and expect the licence to be granted this year," the Winterhall spokeswoman explained. Further applications are in preparation, in the future also together with Equinor.


However, there are still a few hurdles to overcome before the pipeline can be built. So far Wintershall Dea is not allowed to transport CO2 because Germany has not ratified the addendum to the so-called London Protocol. The international trade agreement was already extended in 2009 to allow cross-border CO2 transports. CCS is a thoroughly controversial technology in Germany. In the past, projects on German soil that focused on emissions from coal-fired power plants failed due to a lack of acceptance. The two companies have now announced that they will work with the governments of both countries to create the appropriate regulatory framework. CO2 transport by ship is also mentioned as a plan B for an earlier start of the "NOR-GE" project before the pipeline goes into operation.


Since the beginning of the Ukraine war, Wintershall Dea has been working more intensively on the new mainstay CCS, which is to replace part of the lost income from Russian natural gas production. The Kassel-based company is active at the future LNG terminal in Wilhelmshaven under the project name "BlueHyNow". In this project Wintershall Dea plans to land blue hydrogen for German industrial customers and in return transport CO2 by ship to Norway and Denmark. Wintershall Dea is also already involved in the CCS project "Greensand" in Denmark. /mt