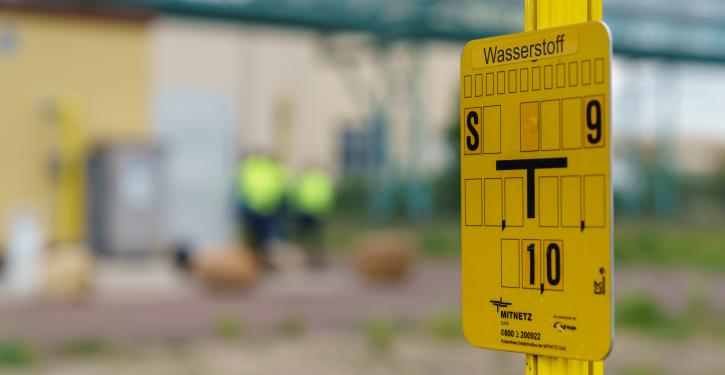 Dena wants to take the financing risks out of the development of a hydrogen network. (Image: Mitteldeutsche Netzgesellschaft Gas mbH)
Berlin (energate) - The German energy agency Deutsche Energieagentur (Dena) wants to accelerate the development of a hydrogen grid. In an impulse paper, it proposes how investments in the initial phase could be secured via an "amortisation account". The proposal is based on ensuring a fair sharing of risks between grid operators, future grid users and the state, Dena said. At the same time, it is compatible with proposals currently under discussion with regard to future regulation.

"The rapid and reliable development of a hydrogen grid is an indispensable prerequisite for the urgently needed ramp-up of the hydrogen economy in Germany," said Andreas Kuhlmann,chairman of Dena's executive board. At the moment, however, planning is faltering because network operators lack investment security and project developers lack the necessary certainty as to whether the required infrastructure will be available in time.


The core of Dena's proposal is to secure investments in the initial phase through an "amortisation account" as well as a politically fixed level of grid fees that is not prohibitive for the first users of the grids. According to the Energy Agency's ideas, the federal government and grid operators should first commit to the accelerated expansion of a supraregional hydrogen grid at the transmission level. The grid operators would be commissioned to build the grid. Investment risks are hedged via the amortisation account, in which initial losses and first revenues are offset and settled at a cut-off year (for example 2035). The hydrogen grid operators then subject themselves to cost regulation by the Federal Network Agency based solely on hydrogen, as envisaged in the amendment to the Energy Industry Act of June 2021. The debate about cross-financing via natural gas grid fees would then be obsolete, according to Dena.

"According to our ideas, users of the hydrogen grid should pay a capped grid fee," Kuhlmann said. This would be higher than in the case of cross-financing via the natural gas networks, but at the same time the users would not have to bear the full costs. The impulse paper on the accelerated development of the hydrogen grid is available online. /tc