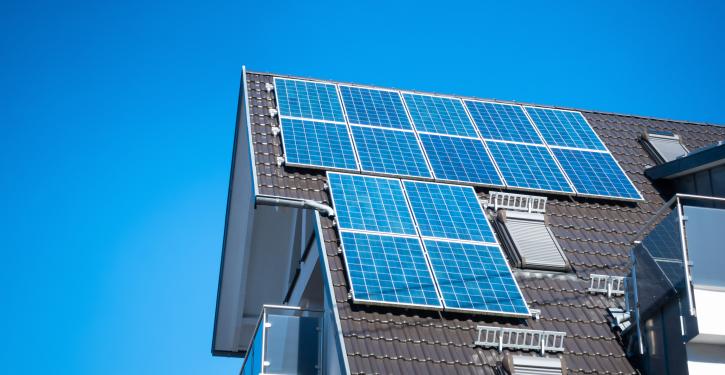 The removal of regulatory hurdles led to more rooftop PV systems up to 30 kW, according to a study. (Image: markusgann/envato elements)
Freiburg (energate) - Rooftop systems up to 30 kW have almost doubled their share from 18.8 per cent in 2018 to 36.2 per cent in 2021. This is the result of a short study on the expansion of photovoltaics in Germany by the Fraunhofer Institute for Solar Energy Systems ISE. "The abolition of the apportionment obligation on self-consumption for PV systems in the 10-30 kilowatt segment is making itself felt here and is releasing forces," Dominik Peper, author of the brief study, said. Systems in the 10-20 kW range, a typical size for private homes, recorded particularly strong growth. In 2020, this segment accounted for only 2.7 per cent, in the following year it accounted for 11.5 per cent of new capacity. Since 2020, the importance of ground-mounted systems has also increased again, accounting for 39.7 per cent of newly installed capacity in 2021.


The north is catching up


The share of the once dominant federal states of Baden-Württemberg and Bavaria has been declining steadily since 2010, so that the expansion of PV systems is becoming more evenly distributed across all federal states. A particularly strong expansion in 2021 was recorded in North Rhine-Westphalia (19.6%), Lower Saxony (10.9%) and Rhineland-Palatinate (6%). The shares of Brandenburg, Berlin, Hamburg, Mecklenburg-Western Pomerania, Saxony and Saxony-Anhalt are also rising, according to the brief study.


The number of newly installed battery storage systems in Germany has also increased. Between 2019 and 2020, the number of new installations doubled and increased significantly again in 2021. At the end of 2021, 326,000 battery storage systems with a total capacity of 3,500 MWh were installed in Germany, of which more than a third were only added in 2021. Between 2014 and 2021, battery storage between 5 and 10 kWh, i.e. classic PV home storage, accounted for an average of 40.3 per cent of new capacity. The Fraunhofer ISE research team attributes this to the fall in prices for battery storage, the simultaneous rise in electricity prices and a drive towards self-sufficiency among system operators. The 10 to 20 kWh capacity class also increased its share of new installations to 32.8 per cent in 2021. At the end of 2021, 85 large-scale storage facilities with a capacity of more than 1,000 MWh were installed; they accounted for an average share of 26.8 per cent of capacity additions between 2014 and 2021. Other capacity classes therefore hardly play a role. /df