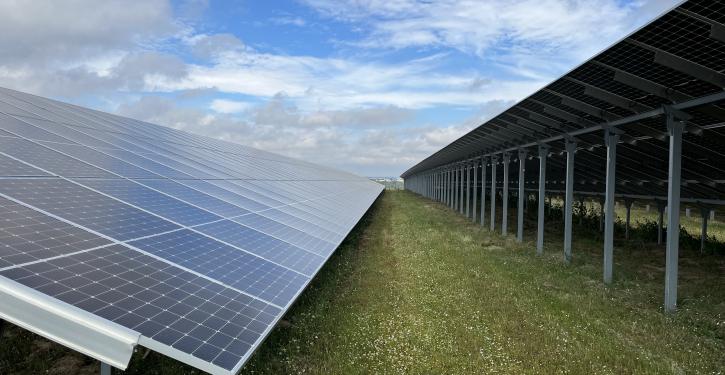 This solar park in Großschirma, Saxony, is combined with a large-scale storage facility whose flexibility is marketed by E2M. (Image: Energy2Market GmbH (E2M))
Leipzig (energate) - The projects from the first innovation tenders of the Federal Network Agency continue to take shape. In Saxony, another solar park including a large-scale storage battery has now officially and fully gone into operation. It is the PV hybrid plant "Großschirma I", which was realised by the Leipzig-based project developer Green Energy 3000. The commercial use of battery storage in combination with PV electricity production is nothing less than "the beginning of a new era", Green Energy 3000 Managing Director Andreas Renker said at the inauguration of the plant.

The PV combined plant consists of a free-standing solar park with 5.1 MW and a large-scale battery with an additional output of 1.7 MW and 3.84 MWh capacity. The Federal Network Agency awarded the Green Energy 3000 project in the second round of innovation tenders in April 2021. Five months later, construction work began and in spring 2022, the solar park went into operation, followed by the large-scale storage system. Because the plant directly compensates for weather-related fluctuations in the feed-in of electricity production into the grid, it saves redispatch costs, it was said.


The project developer is cooperating with EDF Trading and the Leipzig-based direct marketer E2M, which also belongs to the French state-owned EDF. Both companies are behind the electricity marketing concept and the financing of the plant. For this purpose, EDF Trading had concluded a so-called Power Purchase Agreement (PPA) even before completion (energate reported). The ten-year power purchase agreement puts the financing of the project "on a solid footing", they now say. E2M, in turn, is integrating the plant into its own virtual power plant. E2M markets the flexibility of the storage facility both in the short term on the market and in the long term via so-called Flexibility Purchase Agreements. /pa