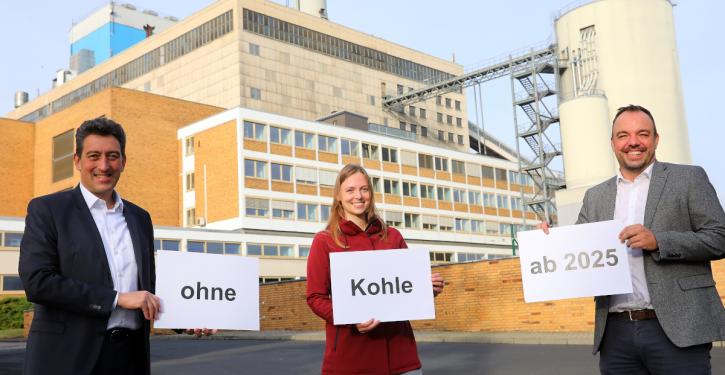 In the gas crisis, CO2-neutral district heating is particularly well received. (Image: Städtische Werke Kassel)
Kassel (energate) - The district heating network in Kassel is growing. The supervisory board of Städtische Werke has approved 9.6 million euros for the construction of an approximately six-kilometre-long supply pipeline, around 80 house connections for 250 buildings and the delivery of the required transfer stations in the houses. Construction to connect the Mattenberg housing estate will begin in 2023. The district heating supply to the approximately 1,100 household customers and municipal delivery companies should then start in the 2023/2024 heating period. "Against the backdrop of the Ukraine war and the climate crisis, this is an important and correct step towards a climate-friendly inner-city heat supply," commented Kassel's Lord Mayor Christian Geselle. The project also pays off financially. "The city of Kassel, GWG, Wohnstadt and private customers have already placed concrete orders and signed declarations of intent," said Olaf Hornfeck, CEO of Städtische Werke. With an expected connected load of almost 8 MW and an annual consumption of 12 million kWh, the investment should pay for itself within 13 years.

The continuous district heating network expansion already started before the start of the Ukraine war, as the heat production possible in the CHP plants is not yet fully utilised, a company spokesperson explained. Additional drive is now provided by the increase in gas prices. Kassel's district-heating network is still dominated by lignite. A conversion to natural gas, as in other parts of the country, is not planned, But from 2025 onwards, mainly sewage sludge and waste wood are to take over the base load (energate reported). "The customers are beating a path to our door with connection requests," the spokesperson reported. The next connection area and further grid extensions have already been decided.


A sewage-sludge drying plant has been in operation for two years. The surplus heat in summer is used to produce fuel for the winter. At present, sewage sludge replaces about 10 per cent of the lignite quantities; the share is to increase step by step. The shortage of skilled workers has made the conversion work at the power plant site difficult, the spokesperson reported. When the new turbine arrived in Kassel, no specialised company could be found that was able to promise a speedy installation. Now the company's own employees are taking over the laying of the pipes and the connections. "Our colleagues are at the top of their game, but otherwise we would not be able to keep to our schedule," says the spokesperson. The necessary conversion of the boiler for the chlorine-containing fuel waste wood, which is due next year, will probably also require the company's own employees again. Here, too, no service provider has been found so far. The company hopes that no further problems will arise and that the coal phase-out will actually succeed by 2025. The next stages are flue gas cleaning and the installation of new technology to neutralise the odour of the sewage sludge. "We are a kind of lighthouse in Germany here in the conversion of a smaller lignite-fired power plant. No one could have warned us about the smell."


The company further announced that the biomass cogeneration plant in the Mittelfeld industrial park will close on 1 August for economic reasons. The quantities of district heating and electricity generated there are comparatively small and are now co-generated at the other two power plant sites, it said. "The closure could have taken place earlier, but we wanted to give all employees good prospects at our other KVV sites. We can do that now," explained Gudrun Stieglitz, technical managing director of the operator Städtische Werke Energie + Wärme. The approximately 30 employees will transfer to the local waste-to-energy plant and the combined heat and power plant. The waste wood previously used in the industrial park will also be burned in the heating plant after the conversion. /mt