Expectations of the German economy on a downward slide 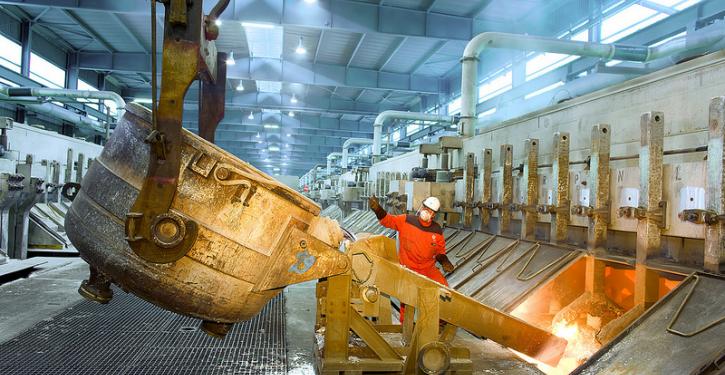 Supplier industries such as aluminium production have gloomy expectations for the future. (Image: © Norsk Hydro)
Munich/Düsseldorf (energate) - The gas shortage is increasingly clouding the mood in the German economy. This is shown by the latest surveys of the Ifo Institute in Munich. Thus, after stabilising in June, the downward trend among German suppliers continued in July. With a business climate of -9.6 points (June: +3.6), the mood was as bad as it had last been in August 2020, according to the Association of the Supplier Industry, which compiles the index together with the Ifo Institute. While the decline in the assessment of the current business situation was still moderate, the slump in the business climate was mainly due to the rapid decline in expectations. On balance, expectations plummeted from minus 22.4 to minus 42.1 points.

The outlook of German suppliers has only been more pessimistic three times since data collection began: in year two after reunification, at the time of the financial crisis in 2008 and immediately after the outbreak of the corona pandemic. The uncertainty among the 600 or so companies surveyed is based on poor forecasts for the international car markets and uncertainty about gas supplies to German industry, it says. The working group speaks of increasingly dark storm clouds: "Effective and immediate political intervention, for example by introducing an industrial electricity price, would not solve all the problems, but it is now existential for many small and medium-sized enterprises."


Exports: Scepticism is spreading in the chemical industry


The uncertain gas supply is also weighing on the mood in the German export industry. Here, according to the Ifo Institute, expectations fell to minus 0.5 points in July, from plus 3.4 points in June. The number of positive and negative responses from the approximately 2,300 companies surveyed currently balanced each other out. According to the institute, manufacturers of data processing equipment as well as electronic and optical products expect export growth. The beverage industry was also confident of increasing its foreign sales. The automotive and mechanical engineering industries are expecting moderate growth. In the chemical industry, however, scepticism is spreading with regard to the export market, the institute said. The same applies to food producers. The printing industry and manufacturers of rubber and plastic goods are expecting declining foreign business. Furniture manufacturers are also more pessimistic. /tc