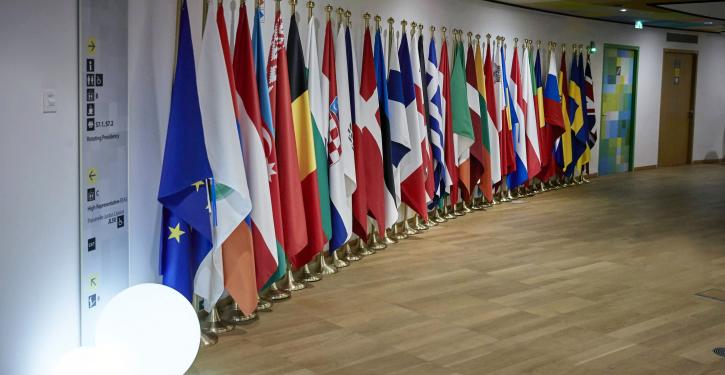 The EU states want to prepare themselves for a Russian gas supply stop. (Image: European Union)
Brussels (energate) - The 27 EU energy ministers have agreed on a compromise at a special meeting on the gas emergency plan for this winter. Compared to the Commission's first draft, significantly more exceptions are possible. The plan originally envisaged that every EU member state, without exception, would voluntarily reduce its gas consumption by 15 per cent from 1 August 2022 to 31 March 2023 (energate reported). The compromise reached by qualified majority under the Czech Presidency now exempts some EU countries.

This means that the EU-wide gas savings target of 45 billion cubic metres, which corresponds to 15 per cent of a normal EU gas consumption of 300 billion cubic metres between August and April, can no longer be met. Adopted as amended was the EU authority's proposal for a regulation that would force member states to save gas in the event of an EU-wide gas emergency. EU Energy Commissioner Kadri Simson considered the compromise reached to be sufficient despite the exceptions: the Council had merely added more flexibility to the EU Commission's proposal. She said the debate had shown that solidarity worked best when the specificities of the Member States were taken into account. "Even with the exceptions, we can make it through the winter. If there were a complete supply cut-off of Russian natural gas in July, we would be short 30 billion cubic metres in an average winter, and 35 billion cubic metres in a very cold one."


Some countries get left out


The energy ministers agreed to exclude critical sectors of life such as food production and island states like Malta and Ireland, which are not connected to the European gas pipeline network, from saving gas. The same applies to member states, such as the Baltic states, whose electricity grid is not synchronised with the European one and which therefore need natural gas for electricity generation. In addition, member states can apply for an exemption from the 15 per cent requirement, i.e. save less, if they have limited interconnection capacity with their neighbouring countries and can prove that they use the export capacity of their interconnectors or their LNG infrastructure to the maximum extent for redirection to their EU neighbours. This is the case for Portugal, for example.

Member states can also apply for an exemption if they have exceeded the 80 per cent filling target of their underground storage facilities and if their critical industries are heavily dependent on gas or if their gas consumption has increased by more than eight per cent in 2021 compared to the average of the last five years.


"There are a few compromises that make sense in the matter," Federal Economics Minister Robert Habeck (Greens) said. These concern the exceptions for critical food production and for island states that are not connected to the European gas grid and that can only make a small contribution to the EU's gas supply security, he stated. However, one had to be careful with the many exceptions that it did not become too bureaucratic. Nevertheless, Habeck spoke of a negotiating success. He said that what had been agreed upon was roughly within the framework needed to compensate for the loss of Russian gas.


The energy ministers reached a political agreement on the EU Commission's proposal for an emergency regulation that would force EU member states to save gas in the event of an EU-wide gas emergency. However, the EU energy ministers set a high hurdle for this: at least five states must ask the EU Commission to propose the declaration of a gas emergency and subsequently at least 15 countries representing 65 per cent of the population would have to agree. The EU Commission actually wanted to obtain a special power of attorney in order to be able to directly enforce the savings targets. In addition, the regulation should only be in force for one year and not two years, as the EU Commission had proposed.

The German Association of Energy and Water Industries reacted in satisfaction to the results of the special meeting: "The Council decisions taken on this today are a step in the right direction, even if the discussions of the last few days have still led to an extension of the exemption possibilities," BDEW Chairwoman Kerstin Andreae announced. /rl