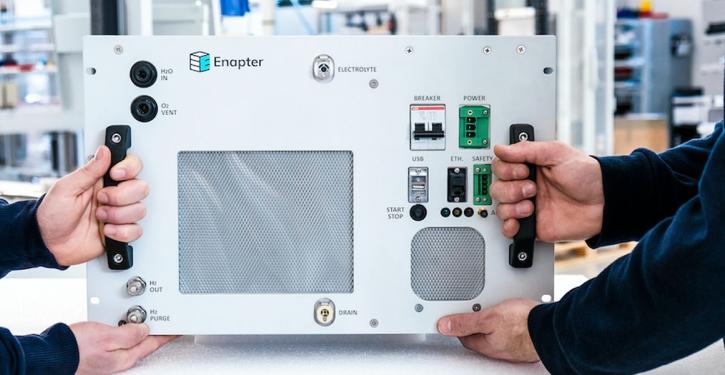 Enapter AG builds modular electrolysers, but serial production in Italy is not getting off the ground as planned. (Image: Enapter AG)
Berlin (energate) - Difficulties with suppliers are upsetting Enapter's plans. The Berlin-based cleantech start-up is expecting delays in the start of serial production of its latest series of electrolysers. Due to "quality problems with supplier parts of individual components", the start of serial production of the AEM electrolyser 4.0 will "probably be postponed to September" 2022, the company announced. Accordingly, the management expects to be able to overcome the resulting bottlenecks by the end of August.

The original plan, however, was to deliver several hundred units of the AEM Electrolyser 4.0 as early as summer 2022. Enapter manufactures these 38-kilogram electrolysis modules in its own factory in Pisa, Italy, which started work in 2019. Regardless of the current delays, the plant in Italy is scheduled to move from serial production to mass production in 2023. By April of this year, Enapter said it already had more than 400 firm orders as well as customer enquiries worth around 300 million euros for the new electrolyser. Accordingly, the problems in the supply chain are also affecting the Enapter Group's balance sheet. Initially, the serial production in Italy was supposed to multiply sales in the current financial year and help reduce the losses incurred so far in the operating business.


Specifically, the management calculated 44.7 million euros in revenues, more than five times as much as in 2021 (8.6 million euros). In addition, according to the previous forecast, the loss before interest, taxes, depreciation and amortisation (Ebitda) was to reach 7 million euros, which would have corresponded to an improvement in earnings of around 8 per cent. In the adjusted outlook, Enapter now expects 85 per cent more revenue than in 2021 and a 64 per cent increase in Ebitda loss to 12.5 million euros. Enapter is also active in Russia outside Germany. A subsidiary that develops software is located in St. Petersburg. As most of the workforce there has left Russia and is working from elsewhere, this does not pose a "significant economic risk", according to the company's latest annual report. /pa