"The dilemma of the Stadtwerke" 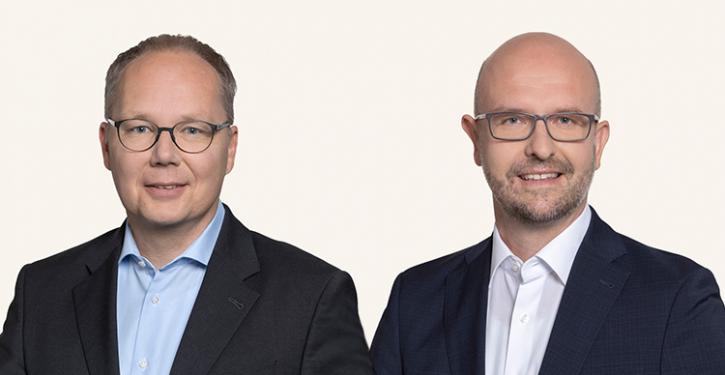 Christian Heintze (l.) and Heiko Schaefer (r.) are specialist lawyers for insolvency law at the law firm BBL Brockdorff. (Image: Roland Horn)
Munich (energate) - The energy price crisis is now also presenting many Stadtwerke (municipal energy suppliers) with existential challenges. In some supervisory board meetings, crisis scenarios leading up to and including insolvency are already being played out. Time to sort out the emergency options, including the consequences.

Not so long ago, Stadtwerke - in particular energy producers and supply companies - were considered a reliable source of financing for strategic future projects as well as for municipal shadow budgets. But that was then: in the wake of the explosion of gas prices, crisis scenarios leading up to and including insolvency are now being played out in many a supervisory board meeting of municipal energy suppliers.

The reason is that due to the current legal requirements, they cannot adjust the tariffs for private households quickly enough to the rapidly rising energy procurement or production costs. In addition, given the usually one-year billing interval, they have to pre-finance the foreseeably high additional payments from private households. And the problem of increased financing needs and the risk of default also affects utilities and municipal utilities with commercial customers.


Limited ability to react to crises


The resulting need to expand credit lines and higher borrowing costs are likely to be a major headache for some municipal utility bosses. This is because their ability to react to crises is also structurally limited: It is not uncommon for municipal utilities to have cross-financed other activities for years and been contrasted with loss-making ventures as profit-making enterprises within a holding structure. Now there is a prompt lack of reserves for losses incurred from the core business.

Against this background, basic commercial skills are more in demand than ever: a solid integrated financial and profit planning over a period of 12 to 24 months is the basis - also for scenario calculations (best and worst case scenarios). Should these plans converge on a possible crisis scenario, the shareholders - usually municipalities - will have to ask themselves whether they are in a position to inject the necessary funds in the short term. "Cash is king" can be heard everywhere.


Limiting the damage with expertise


If the company is not yet acutely threatened with insolvency, medium-term restructuring can still lead to success - for example, economic risks can be bundled in individual companies, thus reducing the influence on healthier parts of the company. In crisis scenarios that threaten the existence of the company, it is important to use the necessary expertise to limit the damage for all parties involved and thus also for the municipal (co-)owners. For this purpose, the discrete procedure of the Corporate Stabilisation and Restructuring Act (StaRUG) can be used, especially for the financial restructuring of companies; but this must be initiated before insolvency application obligations arise.

However, there are also considerable structuring possibilities in protective shield and self-administration proceedings; the German legal framework for this offers one of the most modern restructuring regulations in an international comparison. This does not necessarily mean a total loss for the previous (municipal) owners.


Pull the emergency brake in time


The fact is: the managing directors and with them the supervisory bodies of the municipal utilities are under massive pressure. They must not let the covetousness or fears of local politics prevent them from their legal duty to pull the emergency brake in time, if it becomes necessary. There is a potential for liability here that cannot be compensated for with the remuneration of the managing director or even the expense allowance for committee work. Even the intervention of the federal legislature, for example in the form of a suspension of the obligation to file for insolvency, which some had hoped for, would only give those affected some breathing space. But it would offer no long-term solutions.