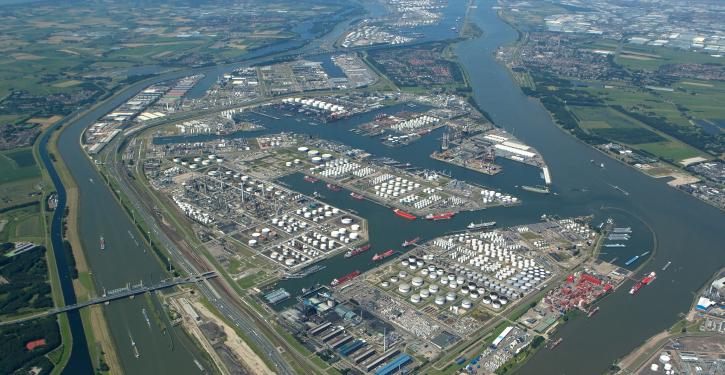 The port of Rotterdam is aiming for a comparable position in the handling of hydrogen as it has in the oil trade. (Image: Hafenbetrieb Rotterdam)
Rotterdam (energate) - The energy companies Shell New Energies NL and Engie want to import liquefied green hydrogen from Portugal to Rotterdam. Together with the tank logistics company Vopak and the shipping company Anthony Veder they want to investigate the feasibility of setting up a corresponding supply chain, according to a joint statement. The hydrogen is to be produced by electrolysis from renewable electricity in the industrial port of the Portuguese port city of Sines. It will then be delivered in liquid form by ship to Rotterdam. From here it will be distributed and sold. The goal is to have the first shipload on its way by 2027.

The cooperation between Shell and Engie covers the entire value chain, while Anthony Veder and Vopak focus on ship transport, storage, and distribution. The starting point for the project is the storage of 100 tonnes of hydrogen per day. Over time the project can be scaled up, they say. There is support from the heavy-duty transport, shipping and aviation sectors for example from Daimler Truck AG which is developing a new generation of trucks that can use liquid hydrogen directly. The company is counting on the import of renewable hydrogen for the markets in the Netherlands and Germany. The governments of Portugal and the Netherlands have already agreed on hydrogen supplies in 2020 (energate reported).


Regarding the development of a hydrogen infrastructure in the port of Rotterdam, the industrial gas producer Air Products and the oil trader Gunvor have recently also agreed on the joint construction of an import terminal for green hydrogen. Deliveries are to start in 2026 in the form of ammonia. Gunvor owns the Stargate oil terminal in the port of Rotterdam which is to be converted into a "multi-purpose low-carbon energy jetty" in the future. Part of the site development has been taken over by Global Energy Storage (GES) (energate reported). In addition to the import of green and blue hydrogen and ammonia respectively this also involves the storage of biofuels and a gas-to-chemicals production facility. /tc