Belgium wants to help France and Germany in the gas crisis 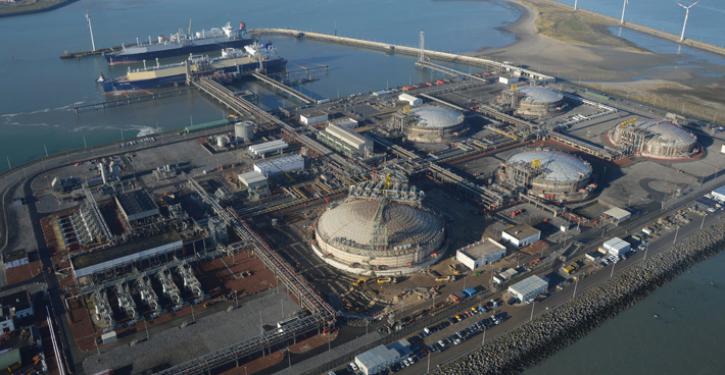 Belgium imports gas via pipelines from Norway and the UK, as well as via the LNG terminal in Zeebrugge. (Image: Fluxys)
Brussels (energate) - The Belgian government has adopted an emergency plan to secure Belgium's energy supply. But Belgium also wants to help its neighbouring countries Germany and France to get through the winter. According to Belgian Energy Minister Van der Straeten, Belgium is in a relatively good position compared to Germany. The country only gets four per cent of its gas from Russia. The gas storage facility in Loenhout is already 70 per cent full and can absorb consumption peaks for 14 to 18 days in winter, according to the green energy minister. With the pipelines from Norway and the UK and the liquefied natural gas import terminal in Zeebrugge, Belgium could import enough gas to cover its own needs even in a harsh winter, she added. "However, our big neighbours France and Germany could face massive problems next winter which would have a strong impact on our economy and energy prices. In this case our country should be able to help," Van der Straeten said.

According to the 2017 EU Gas Security of Supply Regulation ("Gas SOS"), Belgium would also be obliged to do so. The regulation stipulates that an EU member state must help a neighbouring EU state if the latter can no longer supply its protected consumers (private households, district heating plants, hospitals, emergency, and security services, etc.).


Belgium also wants to keep the nuclear reactor Tihange 2, which is controversial because of cracks in the reactor pressure vessel, running until after winter. The reactor, located 60 kilometres from Aachen, was supposed to be finally taken off the grid on 1 February 2023. And the maintenance of the Doel 2 reactor near Antwerp, planned for February, is to be postponed until April. By using nuclear fuel more sparingly, Tihange 2 could remain in operation for one or two months longer, it is said. The nuclear supervisory authority is to examine whether such a short extension is possible from a safety point of view. However, the responsible nuclear power plant operator Engie has raised legal objections to this. The Belgian government had already extended the lifetimes of the two youngest of the seven nuclear reactors in the country Doel 4 and Tihange 3 until the end of 2035 (energate reported).

The measures are primarily intended to secure Belgium's own electricity supply during the winter. This is because there are difficulties in France's electricity supply with which Belgium's is closely linked. In France 28 of 58 nuclear reactors are currently shut down for maintenance and because of cracks (energate reported). The transmission system operator Elia expects that the electricity supply situation in Belgium will therefore be even tighter than it already is in the coming winter. A task force has been set up to coordinate with France. /rl