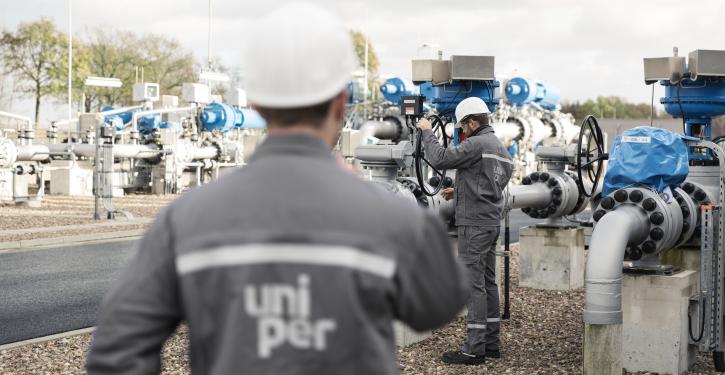 Due to the lack of gas from Russia, Uniper has activated KFW loans in the amount of 2 billion euros. (Image: Uniper SE)
Düsseldorf (energate) - The pressure surrounding the rescue of Uniper continues to grow. The hard-hit Düsseldorf-based energy group has taken out a loan of 2 billion euros from the state-owned KFW Bank. The step was a reaction to "the ongoing supply disruptions of Russian gas and the related developments on the energy markets", the management announced. The loan, which the bank had already granted the company at the beginning of January, was thus fully exhausted. Nevertheless, these funds have not yet been used up, a spokesperson for the group emphasised to energate.

In parallel to accessing the emergency credit, the group's management renewed its appeal to take the next step in the gas emergency plan in order to activate sections 24 or 26 of the newly created Energy Security Act (EnSiG). If this were to happen, Uniper would be able to pass on the massive increase in procurement prices to its customers. The steps now necessary for Uniper are "clearly emergency measures", emphasised Uniper's CEO Klaus-Dieter Maubach. If gas supplies from Russia are not ramped up again, activating the EnSiG paragraphs is the only way to "prevent a chain reaction in the gas supply chain", Maubach continued. Nevertheless, the company's management has now applied for an increase in the KFW loan. Uniper did not want to comment on the modalities or the amount of the newly requested financial aid.


As one of the ongoing emergency measures, the group is currently using stored gas to avoid having to spend more money on current obligations to customers (energate reported). A measure that complicates the general effort to prepare for a gas shortage in winter. So far Uniper has stored around 2 billion kWh, the company said. Furthermore, Uniper has meanwhile informed its customers in writing "of the possibility of rising prices", it added. The high trading prices for gas had already caused liquidity bottlenecks for Uniper last year. In January, the state-owned KFW Bank came to the rescue with a loan of 2 billion euros, which has now been claimed (energate reported). Since the Russian supply disruptions, the financial situation for Uniper has become even more desparate, as the company has to buy additional gas volumes to fulfil its own supply contracts.

Ten days ago, the group's management felt compelled to officially apply for state aid. At the time, CEO Maubach had already advocated an increase in the credit line and made it clear that Uniper would need much more capital in the current market environment. Accordingly, the management expects to have to book losses of up to 10 billion euros by the end of the year. A key question in the current turmoil is to what extent the Nord Stream 1 Baltic Sea pipeline, which is currently shut down for maintenance, will come back on stream after the end of the maintenance cycle expected on 21 July.


The stabilisation of Uniper has been the subject of wrangling at the highest political level for weeks. The special constellation that the Finnish state-owned company Fortum holds almost 80 per cent of all Uniper shares plays a role. Representatives of the Finnish and German governments are therefore struggling to decide which of the two countries will get involved in the rescue of Uniper and to what extent. Uniper, for its part, is seeking a direct participation of the German government in (energate reported). Uniper stated that it is "currently not possible to foresee" when a result of these talks can be expected. Referring to negotiating circles, the "Handelsblatt" business newspaper reports that the rescue package for the group should be in place before the end of the current week. /pa