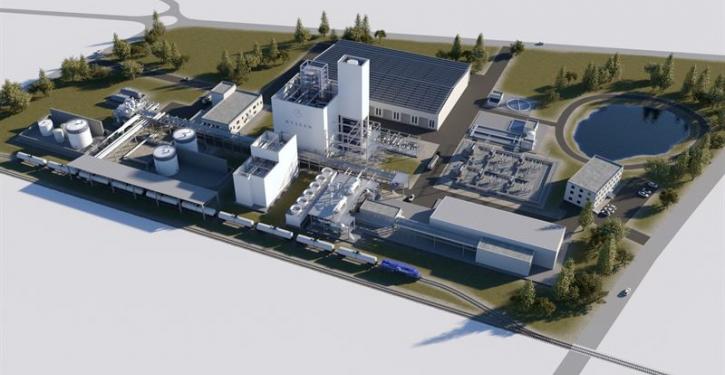 Plants for the production of green hydrogen and paraffin are to be built on the former Jänschwalde airfield from 2024. (Image: Hy2gen)
Jänschwalde (energate) - On a former airfield in Lusatia, the project developer Hy2gen will produce green paraffin from 2027. The hydrogen producer from Wiesbaden has entered into a cooperation agreement with the owner of the former airfield site Euromovement Industriepark for the "Jangada" project which will cost around 500 million euros. Euromovement is planning renewable energy plants for 35 per cent of the "Green Areal Lausitz" (GRAL) commercial and industrial area being built on the site to supply its own electricity (energate reported). Now a production site for climate-neutral fuels will be added, Hy2gen AG announced.


Construction of the 123 MW electrolyser starting in 2024


Hy2gen will take over the planning, construction, and operation of the electrolysis plant for the production of green hydrogen and the facilities for further processing into green paraffin, the so-called Sustainable Aviation Fuel (SAF). Euromovement contributes the know-how for infrastructure and logistics. After a preliminary study on feasibility and risks the project will enter the preliminary and detailed planning phase next year, the so-called front-end engineering phase. Construction of the electrolyser with an initial capacity of 123 MW is scheduled to begin in 2024, so that it will be able to supply green hydrogen from 2017. "Green hydrogen and especially green paraffin (SAF) are essential for decarbonising aviation, especially for long-haul flights," said Matthias Lisson, Managing Director of Hy2gen Germany. /ne