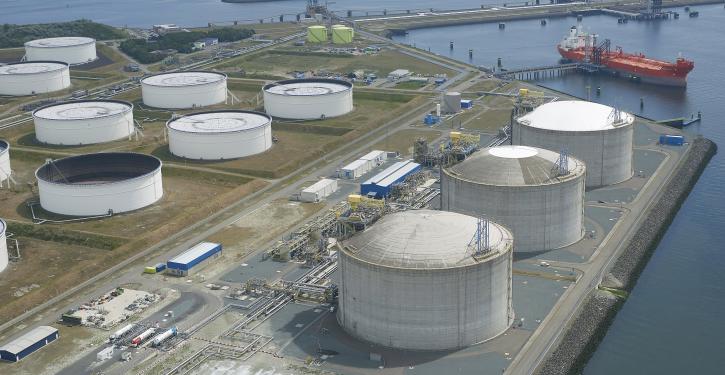 The internationally produced hydrogen products could come to Germany via Rotterdam, for example. (Image: Gate Terminal B.V.)
Berlin (energate) - H2-Global has launched the auction process for green hydrogen with an international market consultation. The consultation in the form of a virtual conference was held by the initiative together with the Federal Ministry of Economics. The operating company of the H2-Global Foundation called Hintco (Hydrogen Intermediary Company) is responsible for handling the auctions. Hintco will tender three products: Ammonia, Methanol and E-Kerosene, all derivatives of green hydrogen. The aim is to conclude ten-year contracts (from 1 January 2024 to 31 December 2033) with one producer for each of the three products on the procurement side, the project promoters explained at the workshop on 13 July. The production of the hydrogen derivatives must take place outside Europe. The products will then be delivered to a port in Germany, Belgium or the Netherlands.


The hydrogen products must meet certain sustainability criteria, which the Ministry of Economics is still to define. The properties of the electrolysis electricity are to be based on criteria that the EU Commission is still working on within the framework of the Delegated Act for the Renewable Energies Directive (RED II). These include, for example, the spatial proximity to the electrolyser and the simultaneous generation of electricity and hydrogen. A first draft was published a few weeks ago. The Ministry of Economics hopes that the EU legal act will come into force at the end of the summer but will not wait for it to be finalised before launching the tender. Bidders in the process must observe further sustainability criteria that include environmental aspects and social impacts of hydrogen production. For example, a sustainable water supply that does not lead to shortages in the regions around the production plants will be a key criterion.


Hintco will be the contractual partner for the producers. The company will then sell the procured quantities to a large number of buyers. The corresponding contracts will have comparatively short terms of one year. However, Hintco will not assume any risks or provide any services of its own with regard to the products. For example, customers will have to collect the hydrogen derivatives at the delivery point. The German government has provided H2-Global with capital of 900 million euros in advance. They are to use these funds to make up the difference between the production costs and the willingness of the demanders to pay. For each product, exactly 300 million euros are available for the period of ten years, i.e. about 30 million euros per year. There will be no more money for the tender, was the clear message during the workshop. This means that the maximum quantity to be contracted per product depends on the subsidy requirement.


The goal of H2-Global is to stimulate an international market ramp-up: "Hydrogen should become 'bankable' and thus make large investments possible," a Hintco representative summarised the goal of the approach. At the end of August or beginning of September, Hintco plans to publish the final tender documents for the tender. The award is expected to take place in early 2023. Hintco does not yet have final solutions on a whole range of points regarding product design and delivery handling and hopes to receive ideas during the consultation. The Ministry of Economic Affairs also considers the start of first hydrogen deliveries as early as 2024 to be extremely ambitious and itself probably expects production to begin in 2025 or 2026. Nevertheless, the delivery period ends at the end of 2033, as the Ministry's funds are only available until then.


There was great interest in the event from Germany and abroad. More than 500 people participated in the virtual workshop. One of the participants, Dutch hydrogen expert Erik Rakhou, Associate Director of the consulting firm Boston Consulting Group, praised the initiative in an interview with energate: "It will help build confidence in a global green hydrogen market." However, the volumes will be very small initially, he cautioned. "The volumes need to get bigger for the initiative to have an effect," he added. Rakhou, however, expressed optimism that this will be the case. The Federal Ministry of Economics and Technology signalled during the workshop that there will be further rounds in one or two years. For this, however, a funding basis still has to be found, he said. /hl