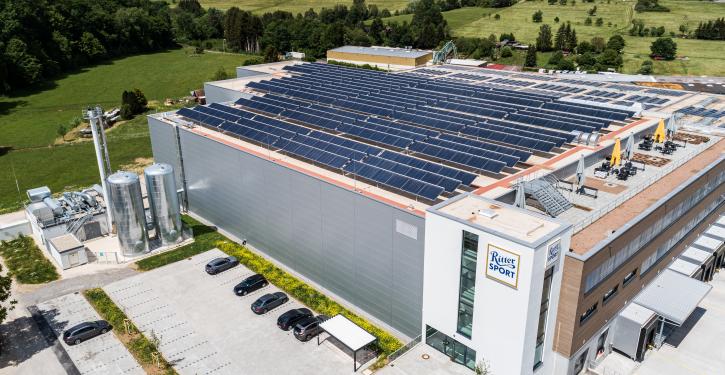 The solar thermal system on Ritter's roof will cover 20 per cent of the heat required. (Image: Stadtwerke Tübingen)
Tübingen (energate) - The public utilities company Stadtwerke Tübingen has started operation of a large solar thermal system. The plant is located on the roof of a newly built warehouse of the food manufacturer Alfred Ritter. With a total area of more than 2,300 square metres, it is the largest solar thermal roof system in Germany, the utility in the state of Baden-Württemberg announced. In the future, the 468 collectors will produce about 1.13 million kWh of heat per year and thus cover about 20 per cent of the heat demand of a local industrial area. The majority of the heat is still supplied by a combined heat and power plant running on natural gas. The energy centre also has a heat pump, a peak-load boiler and two large heat storage tanks. According to the information provided, this combination gives the system a primary energy factor of 0.28. Stadtwerke Tübingen wants to use the system for heating purposes.

In future, Stadtwerke Tübingen wants to integrate more green heat sources. The solar thermal system on the warehouse of the company known for its chocolate brand "Ritter Sport" is only a first step, the company said. The local heating network is also to grow successively over the next few years. The utility had taken over the heating infrastructure from the bankrupt Dettenhäuser Wärme cooperative in 2019, which at the time still had a mobile heating centre (energate reported). During the transition phase, however, it quickly became clear that a technically and ecologically sustainable heat supply was needed in the long term, according to Stadtwerke Tübingen. /ml